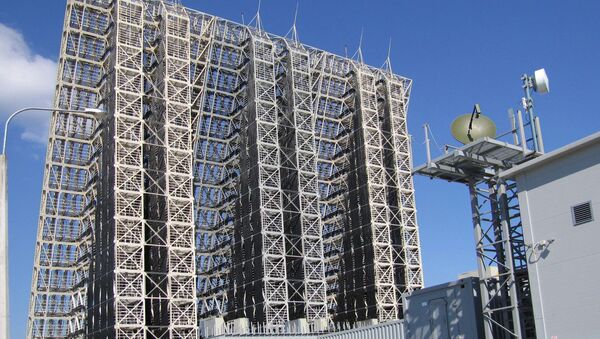 At the moment, the Krasnoyarsk Voronezh-DM complex is already operating in test mode. However, observers say its future potential is even more significant.

Reporting to the defense minister during Shoigu's visit to the region on Tuesday, Aerospace Defense Forces Commander Lt.-Gen. Alexander Golovko said that "as part of combat alert duty in 2016, [Russia's] missile warning system, specialized means of space control and anti-missile defense detected over 40 launches of foreign and domestic ballistic missiles and space rockets."

Can't Hide From Kalibr: Russian Pacific Fleet Subs to Get Deadly Cruise Missile
The Voronezh program is Russia's latest-generation of ground-based early warning systems. At the moment, ten Voronezh-DM (UHF) radar and Voronezh-M/-VP (VHF) radar sites are deployed, planned, or under construction, including the Yeniseysk complex.

Commenting on the special importance of the Yeniseysk system in an article for RIA Novosti, military analyst Andrei Kotz wrote that at the moment, Russia is rushing to restore and surpass its Soviet-era missile early warning capabilities.

The Yeniseysk complex is a Voronezh-DM system, works in the decimeter range, and can simultaneously track up to 500 objects at a range of up to 10,000 km. It can detect all ballistic, space-based and air-based objects up to 6,000 km over the horizon, or 8,000 km vertically, thereby covering near space. The first station of this modular radar type was introduced in 2006.

Speaking to RIA Novosti, retired air defense officer Mikhail Khodarenok explained that the Voronezh radar system is "designed to detect ballistic missiles and their warheads over the radar horizon."

"They work in automatic mode, operating according to a special program for the observation of space, and have a very high probability of detecting targets soon after launch. The information from the systems is immediately transferred to a command post near Solnechnogorsk [a town in the Moscow region]. There, the data is processed and analyzed, after which it is sent to General Headquarters, which decides what to do next. If a mass launch is discovered, the most likely decision is to launch a counter-missile or missile counterattack. The entire process takes only a matter of minutes."

Khodarenok explained that Voronezh radars are able to not only pinpoint a ballistic missile target, but also instantly calculate its flight trajectory, and the time and location where its warhead(s) will fall. In addition, the radar systems serve the valuable peacetime role of monitoring and identification of space junk, including hundreds of possibly dangerous objects, from dead satellites, to rocket boosters, and other trash.

The retired officer noted that the Russian radar operators carefully document this space junk, and add it to special catalogues to distinguish it from ICBMs entering the atmosphere. To date, only Russia and the United States have this capability.

PAK FA and Su-35S: The Future of the Russian Air Force
There is also another very important point worth mentioning, Khodarenok said. "Russia has managed to do what the USSR couldn't in its own time: to create an all-aspect missile attack warning system. In the Soviet Union, up to its collapse, there was a serious gap in the northeasterly direction, which was not covered by early missile warning systems," the expert explained.

"I am referring about the northern part of the Pacific Ocean and part of Alaska. In the event of full-scale nuclear war, the missile submarines of the likely enemy would have the opportunity to stage attacks on our cities and military targets from these areas, with our systems detecting these launches too late," he added.

"This direction was supposed to be covered by a Daryal-U type radar, which was being built outside Yeniseysk. However, in 1987, Mikhail Gorbachev, succumbing to pressure from the US, suspended the project. In 1989, the project was dismantled, at 90% completion. The 'Gorbachev gap' remained open for 28 years."

Later this year, thanks to the Voronezh radar system, the gap will finally be closed for good.

000000
Popular comments
Mr expert it was not that USSR couldn't do it, it was because Mr Gorbachev wanted to transform the socialist country into capitalism and suspended the program. to the wishes of US. USSR was a great country where everything belonged to the people, todays Russia belongs to the oligarchs, period. So we need a new revolution asap.
giorgoskaz11
7 June 2017, 23:27 GMT1
000000
there's a lot more that gorbachev damaged in his time that will take years to recover from.
michael
7 June 2017, 23:40 GMT1
000000
Newsfeed
0
New firstOld first
loader
LIVE
Заголовок открываемого материала
Access to the chat has been blocked for violating the rules . You will be able to participate again through:∞. If you do not agree with the blocking, please use the feedback form
The discussion is closed. You can participate in the discussion within 24 hours after the publication of the article.
To participate in the discussion
log in or register
loader
Chats
Заголовок открываемого материала
Worldwide
InternationalEnglishEnglishMundoEspañolSpanish
Europe
DeutschlandDeutschGermanFranceFrançaisFrenchΕλλάδαΕλληνικάGreekItaliaItalianoItalianČeská republikaČeštinaCzechPolskaPolskiPolishСрбиjаСрпскиSerbianLatvijaLatviešuLatvianLietuvaLietuviųLithuanianMoldovaMoldoveneascăMoldavianБеларусьБеларускiBelarusian
Transcaucasia
ԱրմենիաՀայերենArmenianАҧсныАҧсышәалаAbkhazХуссар ИрыстонИронауОssetianსაქართველოქართულიGeorgianAzərbaycanАzərbaycancaAzerbaijani
Middle East
Sputnik عربيArabicArabicTürkiyeTürkçeTurkishSputnik ایرانPersianPersianSputnik افغانستانDariDari
Central Asia
ҚазақстанҚазақ тіліKazakhКыргызстанКыргызчаKyrgyzOʻzbekistonЎзбекчаUzbekТоҷикистонТоҷикӣTajik
East & Southeast Asia
Việt NamTiếng ViệtVietnamese日本日本語Japanese俄罗斯卫星通讯社中文（简体）Chinese (simplified)俄罗斯卫星通讯社中文（繁体）Chinese (traditional)
South America
BrasilPortuguêsPortuguese
NewsfeedBreaking
01:56 GMTAlex Murdaugh and The Fall of a Southern Dynasty
01:33 GMT'At the End of the Occupation' Country Faces Many Challenges - Head of Afghan National Peace Council
01:11 GMT'Human-Sized Penguin' Uncovered by New Zealand Schoolchildren Reveals Ancient Species
00:52 GMTTrump Expresses Sympathy for US Capitol Riot Suspects Ahead of September 18 Rally
YesterdayUS Approves $500Mln Military Sale to Saudi Arabia to Support Copter Fleet - Pentagon
YesterdayMinneapolis Police Department Buys ‘Not-Reaching Pouches’ to Reduce Deadly Traffic Stops
YesterdayTexas Governor Says Biden Administration Had Plans to Close Section of US-Mexico Border
YesterdayBotched FBI Probe Into Nassar Abuses Highlights ‘Endemic Failures’ Within Bureau, Former Agent Says
YesterdayTwitter Goes Bonkers After Star Batsman Virat Kohli Quits as Skipper of India's T20I Cricket Team
YesterdayHuman Hair as Pet Food? Indian Scientists Develop Unique Way to Use Keratin Waste
YesterdayBiden Retrieved on New Attack Ad Against Buttigieg Over Fears of Reprisal, Book Claims
YesterdayHow New Book About Trump Misfired, Inflicting Further Damage to Biden's DoD After Afghan Debacle
YesterdayUS Grand Jury Indicts Clinton-Linked Attorney for Making False Statements to the FBI
YesterdaySpecial Counsel Durham Allegedly Seeking to Indict Lawyer at Firm With Ties to 2016 Clinton Campaign
YesterdayOne Assassin Can Shift The Balance: Ex Lawmakers Say US Gov't Still Vulnerable to Attacks After 9/11
YesterdayPopulariser of Home Computers Sir Clive Sinclair Dies at 81
Yesterday2024 Republican Presidential Candidates Lay in Wait for Donald Trump’s Decision
Yesterday'Campaign to Destroy Trump'? Why Is POTUS 45 Under Fire Amid Defamation Suit and How Political Is It
YesterdayLabour Foreign Spokeswoman Urges ‘Strategic’ Nuke Sub Response to China’s ‘Genocide’
YesterdayFrance Reportedly Cancels Washington Gala After 'Betrayal' Submarine Deal