One of Iranian Parliament Attackers Blows Himself Up Inside the Building 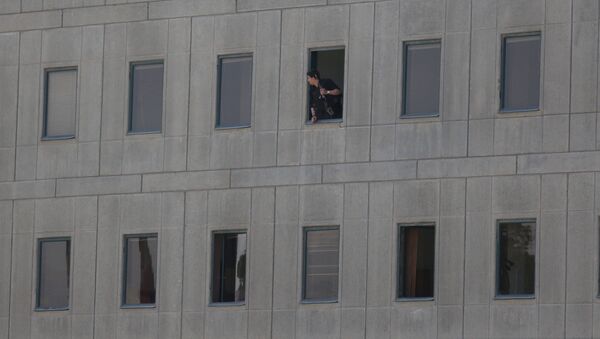 One of the attackers of the Irainian Parliament blew himself up inside the building, Iranian media report.

​Earlier in the day four unknown armed men attacked the Iranian Parliament. The gunmen fired several rounds at the guards protecting the parliament building and wounding several other people.

Unconfirmed Iranian media reported later claimed that seven people have been killed and four held hostage in a shooting inside the parliament complex.

​According to eyewitnesses, attackers were carrying 2 Kalashnikov rifles and a handgun.

After the shooting, one of the attackers escaped the building, bur he was captured as he was on the run, FarsNews reported citing a ranking member of the parliament.

Gunmen Attack Iranian Parliament, Casualties Reported
​According to the Iranian media, one of the gunmen claimed to be a suicide bomber has been surrounded by security forces inside the Iranian parliament complex

However, according to the latest reports, suspected terrorist holed up inside the Iranian parliament building in central Tehran has blown himself up, Iranian media reported Wednesday.

"A terrorist holed inside #IranParliament Building blows himself up," the Press TV broadcaster said on Twitter.

It later cited a lawmaker as saying that one of the attack perpetrators has been arrested.

The Mehr news service, meanwhile, noted later that an explosion was heard at the parliament building.