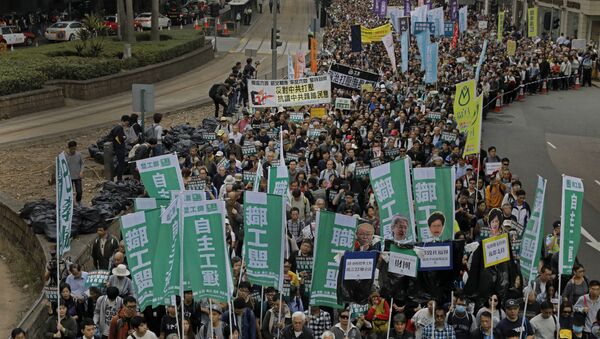 "Undoubtedly, the mainland and Hong Kong economies are on the same path, and this feature is becoming more and more evident," Cheng Shi, senior economist at ICBC International Research Ltd who is based in Hong Kong, told the Global Times on Tuesday.

This year marks the 20th anniversary of the return of Hong Kong to China and the closer linkage between the mainland and Hong Kong financial systems, particularly with the launch of several financial trading connectivity mechanisms in recent years, is a reflection of the mainland intensifying its economic relations with Hong Kong.

"The launch of the stock link schemes not only fulfill the requirements of China's economic opening-up policies, but are also an inevitable result of the fact that the mainland and Hong Kong's business cycles are becoming increasingly synchronous," Cheng told the Global Times.

According to Cheng, the stock link mechanisms have enabled Hong Kong investors to share in the mainland's financial bonuses, while helping the mainland financial market become more stable thanks to the participation of mature investors from Hong Kong.

China Warns Hong Kong Its Autonomy Could Be Revoked

According to Shao, the stock linkage mechanisms also increased the similarities between Hong Kong and the mainland's stock markets. "For example, mainland investors nowadays like to invest in blue-chip stocks, which is a traditional investment strategy on the Hong Kong bourse," he told the Global Times on Tuesday.

Cheng said that Hong Kong stocks are currently performing better than mainland stocks because they are supported both by mainland and international capital. "In the long run, the Hong Kong and mainland stock markets will generate a lot of synergy," he noted.

Investment from the mainland into Hong Kong has also been increasing in recent years.

About 4,000 mainland enterprises invested in Hong Kong in 2016, with the amount of non-financial investment reaching about $86.2 billion in total, chinanews.com reported in May.

According to a South China Morning Post report in September 2016, the yuan's slide has fuelled mainland investors' appetite for commercial space in Hong Kong, which has caused the landlords of some office properties in Hong Kong to dispose of their assets.

But a Sichuan native surnamed Zhao, who now works in Hong Kong, said that Alipay is new in Hong Kong and is only available in big shopping malls. "With Hong Kong's special social formation, such as the large number of banks and the small size of the city, not all the novel business concepts in the mainland can receive good feedback from Hong Kong residents in the short term," she said.

A Hong Kong native surnamed Lin said that most of the investment from the mainland into Hong Kong is focused on the real estate sector, but Hong Kong residents and companies are not so interested in tapping the mainland market. "The peak point [of Hong Kong companies investing in the mainland] has passed," she told the Global Times on Tuesday.

Despite the closer ties between the mainland and Hong Kong in finance and investment, trade has been falling recently. Customs data showed that the mainland's trade with Hong Kong fell 6.5 percent year-on-year to $80.78 billion in the first four months this year.

This article was written by Xie Jun and originally published in The Global Times.