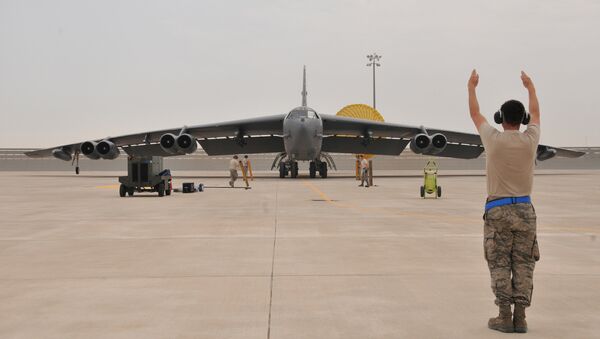 © REUTERS / U.S. Air Force/Tech. Sgt. Terrica Y. Jones
Subscribe
The US Air Force “hasn’t changed” its operations out of its Al Udeid Air Base in Qatar, despite multiple Persian Gulf states cutting diplomatic ties with Doha and US President Donald Trump signaling that actions isolating Qatar could be “the beginning of the end of the horror of terrorism.”

​At the same time, however, the US is "grateful to the Qataris" for their "enduring commitment to regional security," Central Command Capt. Kathleen Atanasoff told Stars and Stripes on Tuesday. Saudi Arabia’s new land blockade may threaten civilians reliant on food imports, but US military forces at the air base unsurprisingly don’t count on ground transports for many supplies. As such, they aren’t likely to be affected by the rift, Central Command said.

Clearly wrong-footed by the president’s Twitter outburst, Dana Smith, US ambassador to Qatar, noted that it was a "good time" to reaffirm that the "US supports #Qatar’s efforts in combatting terrorism financing & appreciates its role in coalition against [Daesh]."

With the president making policy and positions on the fly, once again, the representatives of the administration can’t seem to stay on the same page as its head.

​The decision from Saudi Arabia, the United Arab Emirates, Bahrain, Yemen and Libya’s eastern-based government to isolate Qatar diplomatically won’t have any bearing on how the Pentagon proceeds to use its military base outside of Doha, USAF Secretary Heather Wilson said on Monday in Washington.

Qatar has been accused of supporting extreme jihadism in the Middle East and getting too cozy with Riyadh’s regional arch-rival, Iran. Doha says the charges are a "complete fabrication" that’s part of a conspiracy to "undermine the state of Qatar," according to a Qatari Foreign Ministry statement cited by the Guardian.

Never mind that in 2014 US Secretary of State Hillary Clinton said “the governments of Qatar and Saudi Arabia … are providing clandestine financial and logistic support to ISIL [Daesh] and other radical Sunni groups in the region.”

So Washington is fully aware that the governments of Qatar and Saudi Arabia are backing Islamic extremism, and yet it sees no problem with running air strikes out of Al Udeid. Indeed, even a diplomatic meltdown cannot keep air force jets from regular operations.

"Missions out of Al Udeid Air Base are continuing and have not been impacted," Pentagon spokesman Jeff Davis confirmed to the Washington Times on Monday.