Smell of War in the Air: Saudis Make Use of US Alliance to Quash Qatari Rivals 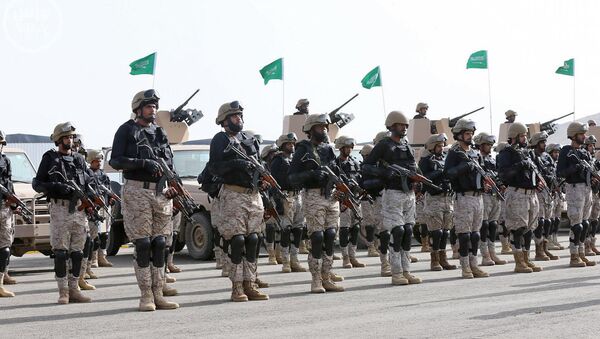 © AP Photo / SPA
Subscribe
The major powers of the Arab world have united against Qatar, cutting off diplomatic ties with the monarchy. Political observer Gennadi Petrov says the crisis, which has roots that go back decades, has more direct origins in President Trump's Middle East tour, where he called on US Arab allies to wage an uncompromising struggle against terrorism.

In his article for Russian business publication Expert.ru, Petrov pointed out that the US's Arab allies duly saluted to Trump's words, and quickly found the one, true 'guilty party', "in the face of this tiny monarchy with unbounded ambitions."

On Monday, Saudi Arabia, the UAE, Bahrain, Egypt, Libya, Yemen, the Maldives and Mauritious severed diplomatic relations with Doha. The countries accused Qatar of supporting terrorism, meddling in the internal affairs of other countries, and cozying up with Tehran, the Gulf monarchies' traditional geopolitical rival.

Room for Maneuver: Who Can Help Qatar Settle Its Regional Diplomatic Row
Tiny Qatar, Petrov recalled, was thrown under the bus, accused of responsibility for all the terrorism in the world, and of providing financing for Daesh (ISIS), al-Qaeda, and the Muslim Brotherhood.

Bahrain accused the emirate of being behind the unrest facing the country, caused by local Shiite groups. Saudi Arabia kicked Qatar out of its coalition of the willing bombing Shiite rebels in Yemen. Transport connections were cut, diplomats kicked out, and even ordinary citizens have been given notice to leave the Arab countries. In short, the observer wrote, "the smell of a new war came to hang over the Middle East."

Petrov emphasized that something like this has not happened in the region for at least 40 years.

"From the time of the Islamic Revolution in Iran, the Middle East monarchs, forgetting their individual quarrels and ambitions, kept close to one another. In the face of the threat of religious extremists who did not recognize the legitimacy of the local ruling dynasties, and Arab nationalists, such as Saddam Hussein or Muammar Gaddafi, the monarchs treated one another as 'friends, comrades and brothers,' [to borrow the old Soviet phrase]. Furthermore, the alliance of kings and emirs had one common bond: their orientation toward the United States." 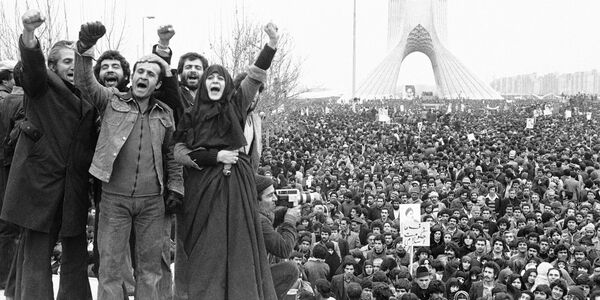 Supporters of Ayatollah Khomeini hold a demonstration in Iran during the Islamic Revolution of 1979
© Photo : Aristotle Saris

"This situation changed when the world changed," Petrov added. "With the fall of the Soviet Union, one by one, the former ideological opponents of the Arab monarchies came down. After the 'Arab spring', instead of small cold wars for ideological reasons, the time for great conflicts irrevocably arrived in the region. Contradictions in the monarchist camp were only sharpened."

"Qatar's appetites proved too great for Saudi Arabia, the current leader of the Arab world, to reconcile itself with. The tiny emirate has two powerful resources – immense reserves of natural gas, and the Al-Jazeera television channel, the first network to gain recognition and popularity throughout the region." 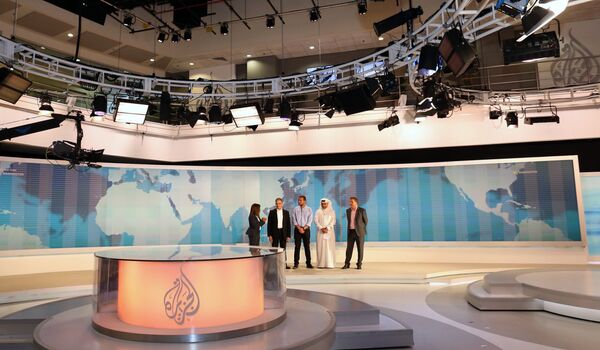 "Using both tools, Qatar would intervene in literally every conflict in the Middle East. Riyadh and Doha's interests would come into conflict with one another time and time again. Egypt, Libya, Syria – always and everywhere the two countries had different favorites among local opposition forces. The two countries found themselves one step away from confrontation on July 3, 2013. On that day, Islamist Egyptian President Mohammed Morsi, who was oriented toward Qatar, was overthrown. He was replaced by the military, who depended on Saudi support."

Next Step - Invasion? Why Saudi Arabia Moved to Cut Ties With Qatar
At that time, conflict was averted. The crisis was resolved, and Qatar even sent troops in aid of the Saudi-led coalition's year and a half-long campaign against Houthi tribesmen in Yemen.

Deliberately or not, this trigger would be provided by the US president, Petrov wrote. 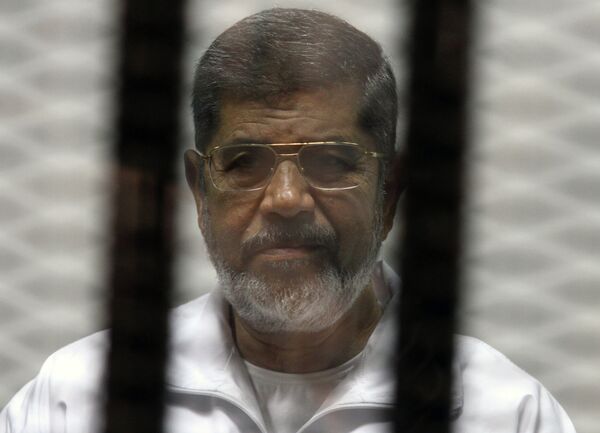 Egyptian ousted Islamist president Mohamed Morsi looks on from behind the defendants cage during is trial on May 8, 2014
© AFP 2022 / TAREK EL-GABASS

"During his visit to Saudi Arabia, Trump showed his support for the interpretation of 'global terrorism' that is adhered to in Riyadh. The interpretation is simple: Iran is to blame for everything. Tehran, the sworn geopolitical rival to Riyadh, is blamed for everything from real or imaginary schemes of expansionism, to real or imagined financing and support for radical organizations throughout the Middle East."

'Qatar-Fly' Effect: How One Rogue Peninsula Struck Fear In Whole of Middle East
For Washington too, Iran is a convenient enemy, Petrov added. "For starters, from the moment of the takeover of the US Embassy in Tehran in 1979, ordinary Americans have regarded Iran's 'regime of mullahs' as a threat to world peace. Second, if one has to choose between Iran and Saudi Arabia, any US president will always choose the latter."

This, the journalist added, has nothing to do with democracy, human rights, or other similarly lofty considerations. 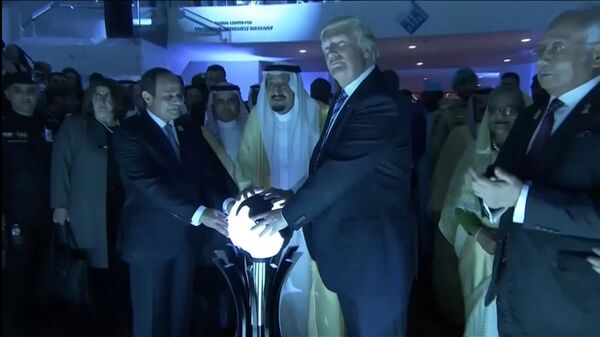 U.S. President Donald Trump places his hands on a glowing orb as he tours with other leaders the Global Center for Combatting Extremist Ideology in Riyadh, Saudi Arabia May 21, 2017
© REUTERS / Saudi TV

"One can talk about human rights as one as one likes, but the fact remains that the situation in Iran is incomparably better than it is in Saudi Arabia. In Iran, the authority of the supreme leader is limited, albeit in a very specific manner; Iran is a republic, and has freedoms that the citizens of the absolute Saudi monarchy could never dream of. It's noteworthy that today, Iranian society is clearly not inclined toward confrontation, as evidenced by the recent reelection of reformer president Hassan Rouhani – who favors expanding contacts with the West."

"It's possible, finally, to recall September 11, 2001, and the alleged links between the terrorists who blew up the Twin Towers and Saudi monarchy officials (which, incidentally, Trump mentioned during his election campaign)."

Trump: Actions Toward Qatar Could Be Beginning of End of Terrorism
"But none of that is enough to cancel out the effect of one very simple fact," Petrov stressed: "Saudi Arabia and the United States are connected by many economic ties, which are impossible to cut without inflicting serious economic damage to the United States; Washington has no such ties with Iran."

"Trump himself seems to have become convinced of the lack of alternatives to Riyadh. He began his journey to the presidency with criticism of Saudi Arabia, but wound up with a project for an 'Arab NATO', a scheme with a distinctly anti-Iranian orientation. Factually, this is a plan to wage a Cold War against Tehran."

"And war, as the Saudi Arabian authorities seem to have decided, will be a write off. Rather, everything can be written off under it, including the demolition of an inordinately ambitious competitor for influence in the region" in the face of Qatar, the journalist concluded.