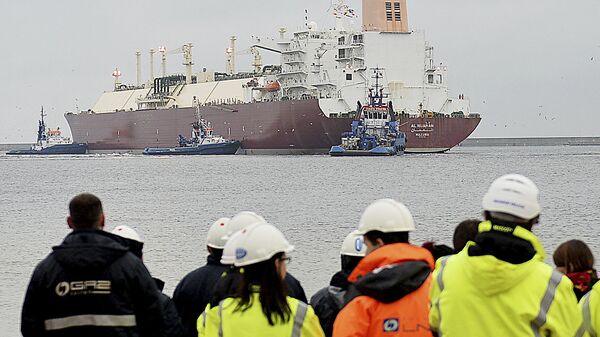 Global oil prices jumped over the rapid rise in tensions in the Middle East on Monday, but then went into reverse, with Brent crude hitting $49.17 per barrel. Sputnik Radio talked to Greg McKenna, chief market strategist at CFD and FX provider AxiTrader, to find out how the regional diplomatic row might affect world oil and gas prices.

'Qatar-Fly' Effect: How One Rogue Peninsula Struck Fear In Whole of Middle East
Qatar is one of the member countries of the Organization of the Petroleum Exporting Countries (OPEC), hence the unprecedented diplomatic row between Doha and Saudi Arabia, Egypt, the United Arab Emirates and Bahrain, which initially cut ties with the country, has instantly drawn the world’s attention to the oil-producing region, sending shockwaves through the oil markets.

The standoff did not affect the supply of oil, but it creates a risk of interruptions in the export of raw materials from the region.

Qatar's oil output is one of the OPEC's smallest, but experts say that this situation could affect the agreement to cut production in order to support global prices.

Experts also say that investors have doubts about the competence of OPEC in maintaining the balance in the oil market, while crude oil prices remain under pressure and oil production in the US is growing.

"It is a very interesting geopolitical plight, which is coming up to President Trump's being to the region and the broken bridge with the Saudis.  It is got to be viewed in this context. Essentially what we've got is this proxy battle between Iran and the Saudis which is going to the next level," he told Sputnik.

"I think that Iran, Saudi Arabia, Qatar and any of the OPEC members will do well in trying and keep the production going because the difficult situation of all these countries was dire twelve months ago and it has only started to repair over a quarter of the year," the expert added.

"The fall in the oil prices reflects the reality: we seem to be in the bear market for oil at the moment where trade is questioning the ability of OPEC to achieve its goals. Saudi Oil Minister Khalid Al-Falih said over the weekend that perhaps they will comeback in July with more caps. But the market seems to have a feeling now that all it is actually going to do is open the way for more North American production and in particular US shale oil," Greg McKenna suggested.

What Trump, Iran Have to Do With Diplomatic Scandal Around Qatar
The expert also commented on how the standoff might affect the balance of power within OPEC.

"It is a question of a physical situation between the Saudis and the rest of the group relative to the ongoing battle between the two Middle Eastern superpowers of Iran and Saudi Arabia and whether it becomes something larger. At the moment it is sending a signal that it is not going to expand and that is possibly why oil has reversed from its highs on the Asian market," he suggested.

Suggesting what possible response from Qatar it might trigger, the expert said that Qatar is not the largest economy or country in the region.

It can probably get Al Jazeera to step up the propaganda a bit more. But it’s not in a position to do much,  as it is a proxy as opposed to anything more concrete, he said.

It is highly unlikely that Iran will step in and confront those four countries which initially severed their ties with Qatar, on behalf of Doha, as it is facing many internal issues in the follow up to the recent presidential elections, he concluded.