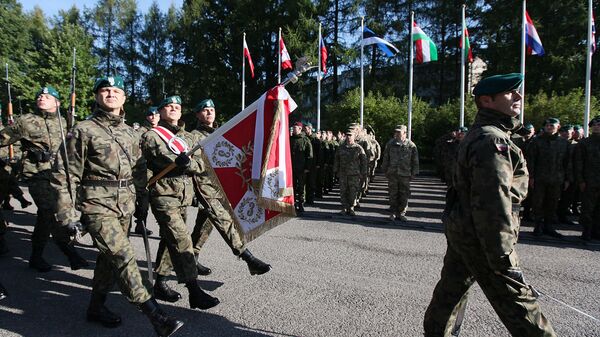 Poland has unveiled a new defense doctrine, listing Russia as its main potential adversary. Poland expert Stanislav Stremidlovsky explains why Moscow will be sure to take the doctrine's conclusions into consideration, even if it's impossible to take the 'Russian threat' rhetoric seriously.

Late last month, Poland ceremoniously unveiled its new defense doctrine. According to the document, "The Russian Federation remains the main source of instability on NATO's eastern flank, affecting the countries of the former Soviet Union – Ukraine, Belarus, Moldova and the countries of the Caucasus."

The doctrine accuses Russia of "aggressive policy," and claims that Moscow attempts "to strengthen its positions in violation of international law, the use of force and coercion against other states," while also working "to destabilize Western structures such as NATO and the EU, and [weaken] transatlantic ties."

Poland Adopts Anti-Russian Defense Doctrine to 'Get More Aid' From Washington
Polish military planners are apparently particularly obsessed with the claim that Russia is willing to use its armed forces to achieve its political objectives.

The new doctrine entails boosting Poland's military capability. Defense Minister Antoni Macierewicz expects the armed forces to be substantially beefed up over the next 12 years, giving the military the capability to defend the country independently of alliance support, something it apparently lacks at the moment. Macierewicz has pledged to boost military spending to 2.5% of GDP, up from 2.2% at present. 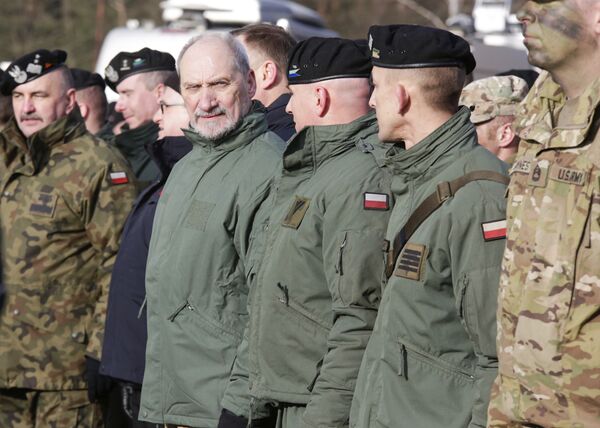 Warsaw has repeatedly claimed that Russia is a threat to Europe and the Western alliance. Each time, Moscow has responded by emphasizing that it would never attack any NATO member state, not only because it does not have such aggressive plans, but because any NATO-Russia war would almost inevitably lead to nuclear holocaust.

Since 2014, NATO has substantially increased its presence in Eastern Europe, sending multinational battalions of troops to Poland and the Baltics, increasing the frequency of drills, and shipping heavy equipment to the region to prepare for war. The US has also begun construction of a nuclear shield in the region, opening an anti-missile base in Romania last year, and starting construction of a similar installation in Poland. 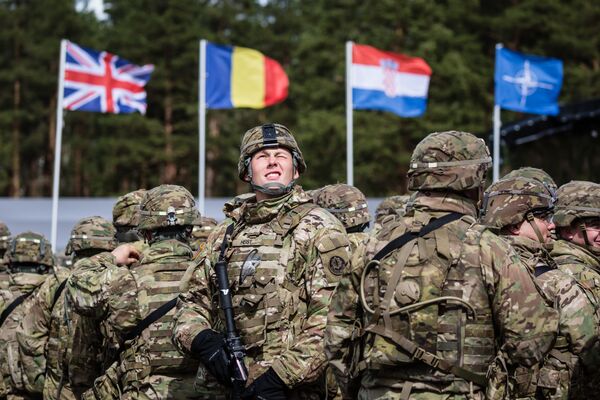 US soldiers are pictured prior the beginning of the official welcoming ceremony of NATO troops in Orzysz, Poland, on April 13, 2017.
© AFP 2022 / Wojtek RADWANSKI

Stanislav Stremidlovsky, Poland expert and political observer for the REGNUM News Agency, says that Poland's new defense doctrine must be seen first and foremost as a political document.

"This text is a political doctrine meant to guide the Polish armed forces," he explained, speaking to Russia's Svobodnaya Pressa online newspaper. "Behind it are figures from the ruling Law & Justice Party…who want to ensure that the Polish army is guided by their own views with regard to the surrounding environment."

Stremidlovsky emphasized that in reality, even Warsaw probably doesn't really believe in the possibility of a NATO-Russia war, much less a Russian invasion of Poland. Russia, he said, simply does not have a sufficient concentration of forces in any of the possible approaches for invasion – whether it be through Belarus, the Baltic states or Ukraine, and Warsaw knows this.

Centuries of Scorn and Loathing: Why Warsaw's Hate for Russia Burns so Intensely
In other words, the analyst said that he believes that the so-called 'Russian threat' may actually be a cover for threats of a very different nature, and from different countries.

Ultimately, the analyst noted that of course, the Russian General Staff would review the text of the new doctrine and draw their own conclusions.

"It needs to be understood how Poland plans to raise its army's strength to 200,000 troops, the time frame in which this will happen, the types of troops it will develop…the program for the procurement of military equipment," etc. All of this "will give Russia some idea of the offensive potential of the Polish Armed Forces," Stremidlovsky said.

"At the same time, there is one interesting paradox. Warsaw speaks about 'Russian threats', but is investing its zlotys on the creation and training of troops for territorial defense. These are ordinary citizens who take 16-day [training] courses. At the same time, the professional army seems to have been left on the back burner. Are volunteers capable of withstanding trained soldiers? Hardly. But catching refugees who might suddenly pour through the borders and into the interior of your country – that is something they can cope with. Look at the map and consider for yourself where a sudden influx of migrants may come from. It's obviously not from Russia…" the analyst concluded.