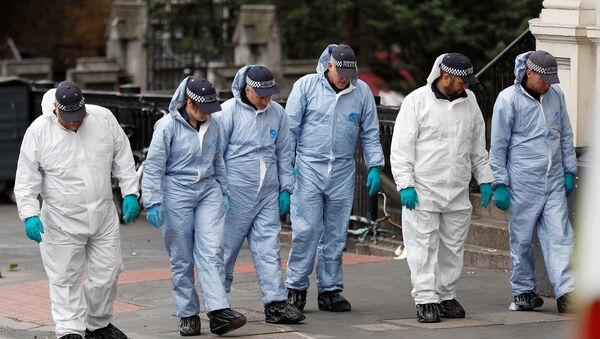 © REUTERS / Peter Nicholls
Subscribe
UK Prime Minister Theresa May is set to hand over more powers to Britain's intelligence agencies and police to beef up the country counterterrorism operations, following the third terrorist attack in as many months, drawing criticism from human rights groups who say she is undermining the very values she seeks to defend.

Theresa May has announced a shake-up in Britain's counterterrorism operations following the latest terror attack, in which seven people were killed and dozens injured when three men drove a van across London Bridge, plowing into pedestrians, before running through the street of the area known as Borough Market stabbing people at random, and then being shot dead by police.

"We need to review Britain's counterterrorism strategy to make sure the police and security services have all the powers they need," she said in the hours after the London attack.

The UK prime minister came in for enormous criticism when she was interior minister and pushed through the controversial Investigatory Powers Act — known as the Snoopers' Charter — which gives the police and intelligence agencies huge powers to access citizen's data — including internet browsing, social media, telephone and email information.

​In the aftermath of the London attacks — coming just two weeks after the Manchester atrocity, in which a suicide bomber killed 22 adults and children and injured more than 100, May said more needed to be done to combat Islamic radicalization on the web.

"We cannot allow this ideology the safe space it needs to breed. Yet that is precisely what the internet — and the big companies that provide internet-based services — provide. We need to work with allied, democratic governments to reach international agreements that regulate cyberspace to prevent the spread of extremism and terrorist planning. And we need to do everything we can at home to reduce the risks of extremism online," she said.

However, privacy groups say the latest terror attacks should not be used as an excuse for more "Big Brother" surveillance of innocent people.

"Having access to every private conversation online — or offline — will not put an end to terrorism: it will put an end to the liberty we all have to speak privately and think freely," wrote Martha Spurrier, director of human rights group Liberty in a blog.

Whoever takes office on Friday — resist the dangerous dichotomy of freedom vs security: keep us safe & keep us free https://t.co/TGm9DkvtcP

"You do not beat terrorism by sacrificing our shared values. You do not beat it by flouting human rights, and the rule of law. You don't beat it by giving into fear — writing compassion, decency and fairness out  of our politics and resorting to laws that discriminate and divide. If you do those things, you hand these brutal, cowardly criminals a victory," she wrote.

000000
Popular comments
The garbage needs to be taken out while minimizing collateral damage to the nation. No pretty solutions to ugly problems outside of Hollywood. sorry.