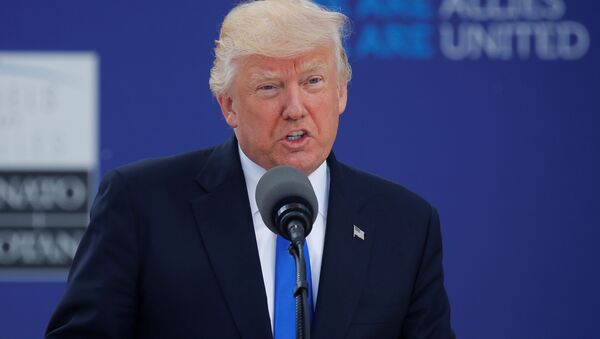 Several White House sources have come forward to claim that US President Donald Trump’s late-May speech before NATO allies was written to include a line explicitly endorsing the alliance’s collective security provision, Article 5. But that line was conspicuously absent from the speech actually delivered.

During Trump's May 25 speech before NATO leaders, he made no direct endorsement of Article 5. The speech was made during an "Article 5 dedication," and Trump did reference it at the beginning of his speech: "This ceremony is a day for both remembrance and resolve. We remember and mourn those nearly 3,000 innocent people who were brutally murdered by terrorists on Sept. 11th, 2001. Our NATO allies responded swiftly and decisively, invoking for the first time in its history the Article 5 collective defense commitments."

Trump did say that the US would "never forsake the friends that stood by our side" in the aftermath of 9/11. But after that, Trump's speech shifted to a chastisement of NATO allies who haven't been committing at least 2 percent of their GDP to defense, an encouraged-but-optional pledge of member states. Only a handful of member states, among them the US, the UK, Greece, Estonia, and Poland, meet that pledge. The other 24 members do not.

Besides his speech's opening, Trump didn't address the contentious provision at all. This makes him the first president in the organization's 68-year history to not do so.

Some were surprised. Others were not. But the issue of Trump's support of Article 5 gained a new wrinkle when White House sources told reporters that such a line was originally included in the speech.

"They had the right speech and it was cleared through [National Security Advisor HR] McMaster," a source told Politico directly after the speech. "As late as that same morning, it was the right one."

"There was a fully coordinated other speech everybody else had worked on," said a second White House source, adding that it wasn't the speech Trump gave.

"They didn't know [the line expressing support for Article 5] had been removed," a third source told the New York Times. "It was only upon delivery."

Reportedly, everyone from aides to top officials were surprised to hear Trump's speech. McMaster, as well as Defense Secretary James Mattis and Secretary of State Rex Tillerson, voiced support for a statement explicitly affirming Trump's support for Article 5, so as to assuage fears of NATO allies that the iconoclastic president would distance the US from the alliance. All three men have publicly supported the provision.

"We're not playing cutesy with this," Spicer told reporters. "I've seen some of the questions I've gotten from you guys, but there's 100 percent commitment to Article 5."