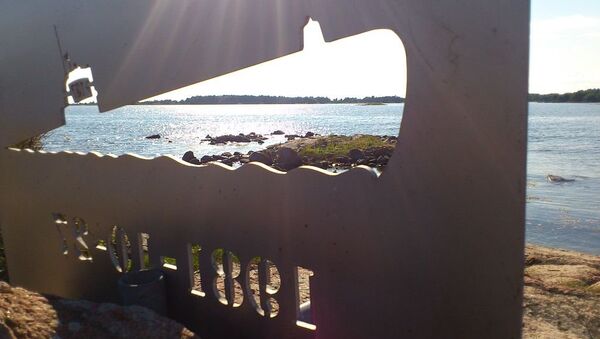 Sweden's new submarine-themed monument in the city of Karlskrona hadn't even been formally unveiled when it became the subject of a major controversy. Whereas some criticized it for being an open publicity stunt for Swedish submarine producer Saab, others claimed it invoked unsolicited hints at an incident involving Soviet submarines.

Last week, a monument modeled on a submarine conning tower was unveiled in the southern Swedish city of Karlskrona, which hosts Sweden's only remaining naval base and the headquarters of the Swedish Coast Guard. The gigantic conning tower, built in composite in Kockum's shipyard and resting on a pedestal of black granite designed to remind observers of the sea, was placed at a major intersection and is visible to all motorists driving to or from Karlskrona.

Before being formally unveiled, however, the monument, which was meant as a tribute to Sweden's submarine history, sparked a hot debate.

Local journalist Bertil Ahnlund slammed the monument as "war-inspiring" and argued in his opinion piece in the local newspaper Blekinge Läns Tidning that more arms is not what the world needs for a peaceful living.

Swedish Saab Hopes to Make Billions on Europe's Sweeping Military Upgrades
He also pointed out that Saab was indeed Sweden's largest manufacturer of military equipment, stressing that peaceful Sweden actually sold more arms per capita than the US or France and that some of its exports went to warring countries. While he lauded Saab's business acumen for placing a business ad in the best spot available, effectively making submarines a signature of Karlskrona, he also admitted that he himself did not share the pride that many people feel about it.

In May, amid debates on the politicization of city art, the then-to-be- inaugurated monument was vandalized, as someone sprayed the letters U-137 over the conning tower, Swedish Radio reported. U-137 was the Swedish designation of the Soviet Whiskey-class submarine S-363 that ran aground on October 27, 1981 at Torumskär just outside Karlskrona.

​This incident, which is often referred to as "Whiskey on the rocks," triggered an 11-day long diplomatic tug of war between Sweden and the Soviet Union.

Swedish Navy Elated as Chinese Entrepreneur Buys Gotland Submarine Port
The USSR tried to reclaim the stranded submarine, which was claimed to be in severe distress, yet the Soviet task force was confronted by the Swedish naval forces and denied access to the boat. Subsequently it was hauled off the rocks by Swedish tugs and escorted to international waters where it was handed over to the Soviet fleet.

At the time, the incident was generally seen as a token of widespread Soviet infiltration of the Swedish coastline, effectively fuelling Swedes' historic fear of Russia and sowing the seeds of submarine paranoia still manifest today.