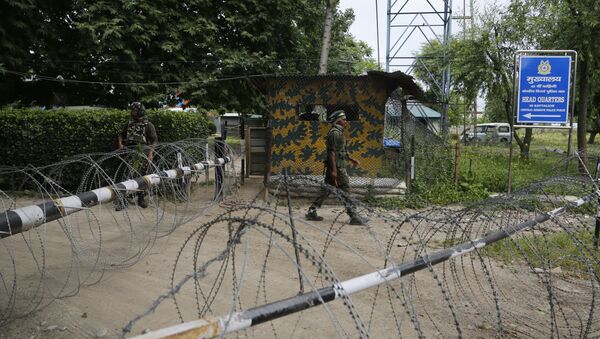 Four heavily armed militants were killed after they tried to attack an Indian paramilitary forces camp in the northern state of Jammu and Kashmir, according to the Office of the Home Minister of India.

Pakistan Refutes Accusations of Killing Indian Servicemen at Kashmir Border
MOSCOW (Sputnik) — Four heavily armed militants were killed Monday after a pre-dawn suicide attack on an Indian paramilitary forces camp in the northern state of Jammu and Kashmir was thwarted, according to the Office of the Home Minister of India.

"Early this morning a group of heavily armed Fidayeen [suicide bomber] terrorists approached the CRPF's Sumbal camp with the intent of breaching the camp… However the CRPF, in cooperation with force from the adjoining J&K police camp shot dead all the 4 terrorists," the Home Office said on Twitter.

Indian Troops Launch Major Rebel Hunt in Indian Side of Kashmir
It praised the CRPF officers, and the Jammu and Kashmir police forces for their "alertness and unmatched bravery."

The Indian Home Office also stated that the "terrorists were heavily armed with automatic rifles, grenades and incendiary material such as petrol, and were carrying dry rations." That meant the militants intended to carry out a prolonged siege and cause extensive damage, the Home Office pointed out.

Kashmir has been disputed between India and Pakistan since partition of India in 1947. The two countries have gone through three wars over the region, but the conflict has not been resolved. The recent significant escalation is connected with the killing of Burhan Wani by Indian security forces in July 2016. Wani was the leader of a Kashmiri separatist group, outlawed in India.