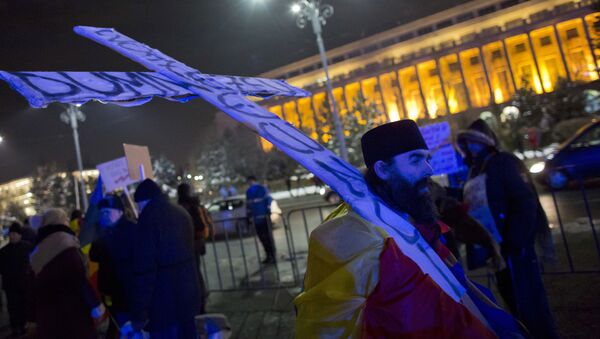 The Romanian Orthodox Church’s expansion on the Balkans appears to be a part of Bucharest’s plans to make the dreams of Greater Romania come true.

EU Promotes Stability in the Balkans 'at the Expense of Serbia'
It appears that ever since Romania became a member of the EU and NATO, the country sought to fulfil its long-time ambition of creating the Greater Romania — a nation-state which would incorporate all Romanian speakers.

And now it seems that Romania seeks to further its agenda at the expense of its old ally and partner Serbia, according to Sputnik Serbian columnist Nikola Joksimovic.

Claiming that all Vlachs and Romance-speaking people  are Romanians, regardless of what the aforementioned people think, Bucharest callously trampled on relations with other Balkan states on its quest to make the Greater Romania dream come true.

And now it appears that the Romanian Orthodox Church is being employed by Bucharest to further its ambitions, according to Joksimovic. Arguing that all Romance-speaking people are Romanians, the church actively sought to expand its activity across the Balkans, blatantly infringing on the territory of other Orthodox churches.

Orthodox publicist Vladimir Dimitrievic told Sputnik that as the EU and NATO expanded to the east, the new members of these blocs apparently decided that it would be a good opportunity to rob their weakened neighbors who did not join these organizations.

It appears that after joining the EU and NATO, Romania decided that with the protection offered by its new friends it no longer requires old friendships and started acting inappropriately towards its traditional partners and allies, political analyst Dragomir Andjelkovic added.

The analyst explained that Romania’s actions "lead to nowhere", especially when the relations between the two nations are concerned.

"This is merely a pretext for something else – namely, the way certain forces that seek to destabilize the Balkans are using Romania to apply pressure to Belgrade. As it is not in Romania’s best interest to sour relations with Serbia, this issue serves as a good pretext for those who seek to drive a wedge between the two countries," Andjelkovic commented on this latest Romanian church expansion.

The Romanian Orthodox Church ceased to respect the old rules on territorial delimitation of the Orthodox churches’ activities and will have to answer for it, Andjelkovic warned.

"By undermining the positions of Serbia, their old and trusted friend, they put their own future in peril, because I don’t think that the current situation in the world will last as long as the European and NATO strategists believe," he surmised.