No More US Hand-Me-Downs: Duterte Wants Brand New Weapons at Any Cost 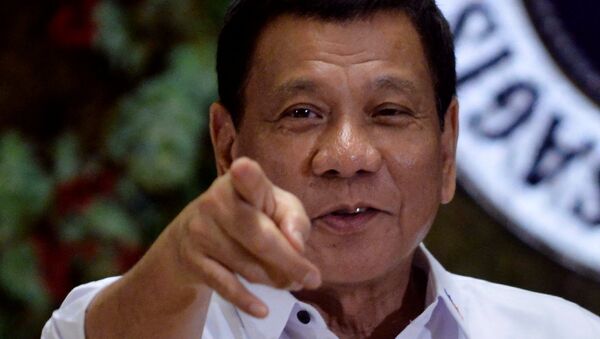 Duterte on Friday said he is interested only in brand new, state-of-the-art weaponry, according to Business Insider.

"I will no longer accept second-hand military equipment," Duterte told soldiers at an army base on the southern island of Mindanao. "I do not want those given by the Americans. During my time, I will not have second-hand ships. It has to be brand new."

Asia
This is What May Stop Duterte From Buying Advanced Russian Weaponry
Duterte said he will pursue brand new weaponry even if it is going to cost him "double the money."

If Duterte makes good on his vow to stop buying weapons from the United States, he will unavoidably turn to either Russia or China, the US' main competitors on weapons markets.

In May, the Philippines president stressed that Washington imposes too many conditions on selling arms to his country.

"Russia sells arms, it does not impose any conditions. When Russia sells arms this is the arms. You need it, I will give it to you…Can you do that with America? No. Because the president says he will give and the State Department said No. And the congress says no, he violates human rights, so we keep a distance. If that is the way, so be it… I will not ask for mercy for that alone. I can go to Russia," Duterte said.

There are constitutional restrictions that prohibit Duterte from expanding his military budget beyond the nation's spending on education. The Philippines' current military budget is estimated to be about $2.76 billion.

Duterte may try to crank military spending up to $10 billion — about the sum the Department of Education received in 2017, but that would account to more than 15 percent of government spending altogether.