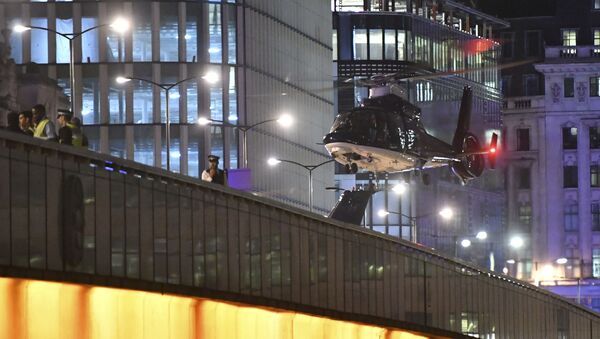 "It has now been confirmed sadly that seven members of the public have died. In addition, as you know, we believe, three suspects are dead," London's Metropolitan Police chief Cressida Dick said in a televised statement.

Putin to May: London Attacks are 'Shocking in Cruelty and Cynicism'
London Metropolitan Police Chief said during a press conference on Sunday that the investigation is "moving fast" and that "very significant" resources had been deployed to investigate the attacks.

According to the London Met Police, their priority is "to work with counter-terrorism police colleagues to establish more details about the attackers."

"This is a very worrying time for people," Cressida Dick said. "I would ask Londoners and visitors to remain calm and be vigilant."

At Least One Australian National Among Victims of London Attacks
He then asked people "not to over-react": "The last thing we need is people overreacting or taking out their frustrations on people in other communities."

Asked about the threat level having been lowered to "severe" rather than "critical," Dick said that the police were prepared for a potential incident and dealt with it within 8 minutes.

"Our understanding is there were three attackers <…> We have witness reports about three people armed with knives <…> The threat that they posed was neutralized within eight minutes," Dick pointed out. "We don't believe any suspects are at large but need to make absolutely sure."

Asked whether she knows the identity of suspects in London Bridge attack, Dick said that she didn't.

London Metropolitan Police Chief assumed that her team "will be sharing information" with their American colleagues.

"Our priority now is to work with our colleagues in the national counter-terrorism police network and also with the intelligence agencies and other security services to establish more details about these individuals who carried out the attack and the background to it," she said.

Incident in London Being Treated as Terrorist Attack - British Prime Minister
In the meantime, UK political parties have shown different reactions to the events.

UK Prime Minister Theresa May said Britain's Conservative Party is suspending national campaigning ahead of the general election on June 8 as a result of the terror attacks in London.

UK Independence Party (UKIP) refused to suspend their election campaign, saying that "disrupting our democracy is what the extremists want."