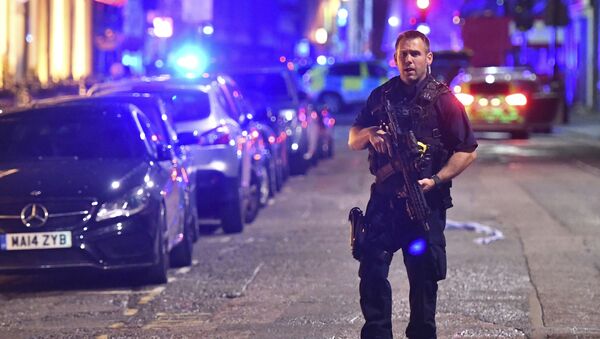 © AP Photo / Dominic Lipinski
Subscribe
At least six people have been killed and some 30 injured in a terrorist attack in London Saturday. Police have killed three of the suspected attackers.

The attack began when a van travelling at a high speed deliberately crashed into pedestrians near London Bridge. The drivers of the van then ran out with knives, attacking people on the street and in businesses in nearby Borough Market.

The white van plowed into pedestrians on or near the bridge. Following the van attack, witnesses say at least three men spilled from the vehicle, carrying large knives. They reportedly attacked pedestrians on the street, and stormed into a nearby restaurant, attacking patrons and staff.

"We were walking on the bridge and the van went up onto where people were walking," a witness told Reuters. "We saw a few being knocked over."

Several victims never saw the van coming, the witness said. "They didn't even see it climbing on the pavement," said the witness. "The police came pretty quickly."

Witnesses have said the men emerged from the van were yelling that they were acting for Allah. ‘This is for Allah!' one of the attackers screamed, witness Erick Siguenza told BBC News.

It was later reported that several people had been injured in a stabbing attack in nearby Borough Market, where attackers burst in to at least one restaurant with long knives and began attacking staff and patrons.

UK television showed police leading dozens of people down city streets with their hands on their heads.

A witness told MSNBC he heard "six to eight gunshots" near the London Bridge area. He said he ran and hid, and was then told by police to run home. A security officer near London Bridge also told the network she saw people bloodied, running and screaming from the scene.

Witnesses speaking to Fox News described people being ordered by police to evacuate apartment buildings and other structures, apparently to aid in their search for suspects.

BBC reporter Holly Jones was in the London Bridge area when the van attack occurred. She told the BBC that a man was driving the van, which was "probably traveling at about 50 miles an hour" when it apparently began mowing down pedestrians. Jones said the van struck five or six people, and that she witnessed a man later being taken away in handcuffs.

"He swerved right round me and then hit about five or six people," Jones told the channel. "He hit about two people in front of me and then three behind." She witnessed the injured being treated by paramedics, she said.

The London Ambulance Service said that over 30 people were being treated across London following the terror incident.

Our latest statement on the #LondonBridge incident. We have taken 30 patients to five hospitals across London https://t.co/hCiKVCBrnb pic.twitter.com/B3PrRKoMUR

​Armed police are at the scene of the apparent attack, along with helicopters and ambulances. Police apparently told other pedestrians in the area to flee.

Witnesses describe the scene as "horrific." The managing editor of The Spectator was apparently on the scene when the incident occurred and is reporting that he saw two casualties, one on the pavement and one in the road, according to British media.

A witness, who was doing a night photography class on London Bridge, said he saw the van veering on and off the pavement on the bridge.

"It looked like he was aiming for groups of people. I froze because I didn't know what to do," Mark Roberts, a 53-year-old management consultant, told Reuters. "It was horrendous."

"I was thinking: Which way do I run to get away?" he said, adding that the van then veered onto the other side of the bridge before hitting a girl. "I immediately thought this was the Westminster attack all over again."

London Bridge is closed in both directions and the London Bridge rail station has also been closed. British Prime Minister Theresa May has been briefed on the attack and is in contact with officials, Downing Street reports. US President Donald Trump has also been informed, his press secretary announced.

UK police have killed three attackers. Several controlled explosions were reportedly conducted after police found suspects wearing canisters attached to their bodies. Later, the police reported that those canisters had been established to be hoaxes.

May will chair a security meeting on Sunday morning.

The UK is still reeling from a suicide bombing in Manchester earlier this month, which killed 22 people, many of them children, following a concert.