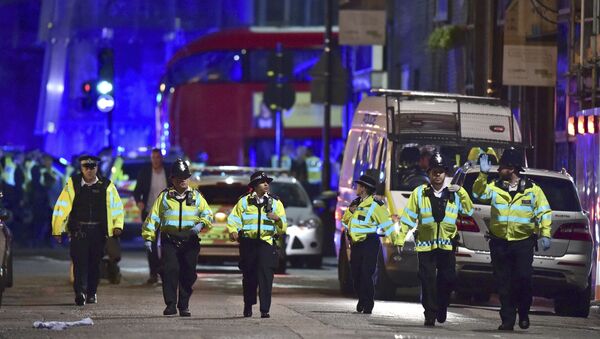 Witnesses report victims of an apparent stabbing attack lying in the streets around the van attack on London Bridge.

A video shows London police apparently storming a bar and ordering patrons to the ground. Witnesses tell CNN they saw two men enter a restaurant near London Bridge and stab a waitress and a patron inside.

​​Borough Market is about 500 meters from London Bridge, where earlier it was reported that a white van drove up on the pavement and mowed down pedestrians.

BBC News reports that the police are hunting for three suspects, possibly armed, in connection with the incidents.

​The Metropolitan Police now appear to be spreading throughout the area, hunting for suspected assailants. UK television has shown dozens of people being escorted out of police cordons near London Bridge with their hands over their heads.

UK Prime Minister Theresa May and US President Donald Trump have been informed of the incidents.

​​The UK is still reeling from a suicide bombing in Manchester earlier this month, which killed 22 people, many of them children, following a concert.

A third incident reported in the city's Vauxhall area is not related, the Metropolitan Police announced.