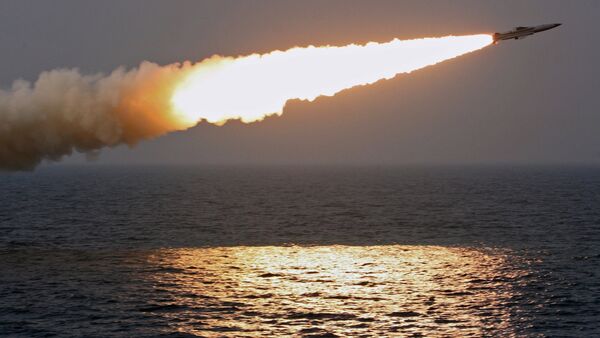 © Sputnik / Ildus Gilyazutdinov
Subscribe
China has developed an “ultrafast” missile interceptor, a defensive weapons system it claims only the US and Russia had before.

Pentagon Missile Defense: A ‘$244 Million Baby Step’?
The China Aerospace Science and Industry Corporation (CASIC) has announced it developed an "ultra-fast" missile interceptor capable of destroying a projectile travelling "10 times faster than a bullet" and flying at the altitude of "tens of kilometers," according to the China Daily newspaper.

According to the publication, a team of scientists and engineers from CASIC's Second Academy in Beijing, with an average age of 32, developed a "new generation aerospace defense missile" that incorporates the most sophisticated aerospace technologies and which it describes as one of the cornerstones of China's strategic military development.

China Daily claims the new weapon is so complicated and difficult to develop that only Russia and the US were in possession of such technology beforehand.

However, the article does not specify the exact parameters of the projectiles it can intercept, so it is up to experts to make their bets. Some take the publication literally and calculate that the altitude of "tens of kilometers" may mean 10 to 100 km high, and "10 times faster than a bullet" means at least 12,000 km/h, as the handgun bullet, the slowest of all, normally travels at about 1,200 km/h, according to China.org.cn.

The US's Boeing X-51 missile prototype in development has reached Mach 5 to Mach 6 speeds, while its predecessor, the NASA X-43 unmanned plane, set a speed record for a jet-powered aircraft of 11,850 km/h or Mach 9.6, before the program ended.

China's implied specifications, therefore, if not totally impossible, are very likely to be quite a bit of an exaggeration.

Russia Forced to React on US Missile Shield Expansion, Including in S Korea
Two days earlier, both China and Russia condemned the United States for testing its own missile interceptor system, which was fired from Vandenberg Air Force Base in California and successfully destroyed a mock ICBM fired from Reagan Test Site on Kwajalein Atoll in the Pacific.

Both Russia and China stated that the US's move will certainly begin a new arms race, as it destroys the established nuclear deterrence balance in the world.

The Chinese position was published in the China's People's Daily, a state-run media outlet.

The US "has opened a Pandora's box," the article read. "What the US has done will indeed start a new arms race."

"China worries about the impact the US missile defense system would have on China's counter strike capability," said Zhao Tong, a research fellow in the nuclear policy program at the Carnegie-Tsinghua Centre for Global Policy in Beijing, according to the National Interest. "It's China's biggest concern. To deal with that, China would develop new ground-based, sea-based or multi-head missiles."

Russia's President Vladimir Putin commented on the US interceptor to reporters at the economic forum in St. Petersburg.

"This destroys the strategic balance in the world," Putin told reporters. "What is happening is a very serious and alarming process. In Alaska, and now in South Korea, elements of the anti-missile defense system are emerging. Should we just stand idly by and watch this? Of course not. We are thinking about how to respond to these challenges."