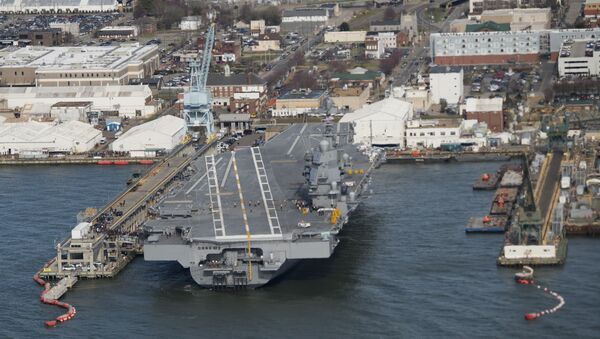 © AFP 2021 / SAUL LOEB
Subscribe
The US Navy has added to its arsenal the USS Gerald R. Ford, the most advanced and expensive aircraft carrier ever built.

"Such ships are not frigates or destroyers which can be built by the dozens. Each aircraft carrier is essentially a unique ship," Russian defense analyst Victor Murakhovsky told Sputnik, adding that the built-in equipment produced for these vessels is extremely expensive since it is brand new.

The USS Gerald R. Ford is expected to be placed into active service this summer. It would become fully operational in 2020 after what the US Navy described as a "shakedown" period, which will see the aircraft carrier "conduct several at-sea events to provide longer underway periods for the ship's crew to operate and train on the ship's systems."

Murakhovsky added that overall the United States is the only country capable of building such ships.

Way Over Budget and Way Behind Schedule: US Accepts New USS Ford Supercarrier
"The US Congress allocates funds [for these programs]. Americans view these efforts favorably since this is one of the key means of projecting power beyond US soil," he said.

"This aircraft carrier costs approximately $13 billion, equal to the price tag of six cutting-edge nuclear-powered submarines combined. The US plans to outfit the USS Gerald R. Ford with significantly more planes than the Nimitz-class. Approximately 150 aircraft will be deployed to the new ship. One of the new solutions includes using an Electromagnetic Aircraft Launch System (EMALS) instead of steam catapults," he explained.

The USS Gerald R. Ford, also known as CVN-78, is the lead ship of her class of the US Navy's supercarriers. The aircraft carrier, built by Newport News Shipbuilding, was launched in 2013. The ship is expected to be armed with RIM-162 Evolved SeaSparrow and RIM-116 Rolling Airframe missiles produced by Raytheon.

000000
Popular comments
Latest addition to a fleet of totally useless sitting ducks, in case of war. The size of the target is irrelevant nowadays thanks to Russian missile tech but sinking one of these is always a reason to bottle up.