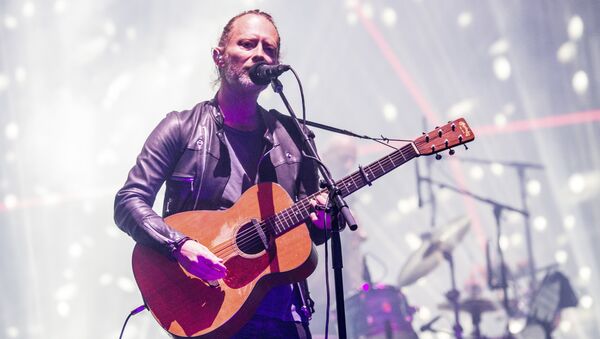 © AP Photo / Amy Harris
Subscribe
Thom Yorke of the legendary rock group Radiohead has broken his silence about the band’s controversial planned show in Tel Aviv, Israel. The Boycott, Divestment, and Sanctions (BDS) Movement has urged Radiohead to cancel the show, an act that Yorke called “patronizing in the extreme.”

Radiohead has played in Israel eight times over their illustrious 30-year career, with their last show taking place in the summer of 2000. But that was before the beginning of the BDS movement, which calls for political, economic and cultural protest against Israel until they meet the movement's demands.

Those demands include an end to the West Bank barrier, the end of Israel's internationally condemned settlement building projects in the West Bank, the granting of the "right of return" for Palestinian refugees and their descendants who fled during the 1948 Palestinian Exodus, and other stipulations. Prominent musical acts such as Gorillaz, Thurston Moore (former frontman of Sonic Youth), Roger Waters (who co-founded Pink Floyd), and Elvis Costello have all joined the BDS movement.

Fifty prominent individuals, including musicians as well as civil rights figures such as Desmond Tutu, released an online petition protesting Radiohead's Tel Aviv concert. "In asking you not to perform in Israel, Palestinians have appealed to you to take one small step to help pressure Israel to end its violation of basic rights and international law," they wrote on April 23.

"Surely if making a stand against the politics of division, of discrimination and of hate means anything at all, it means standing against it everywhere – and that has to include what happens to Palestinians every day. Otherwise the rest is, to use your words, 'mere rhetoric.'"

Since then, the band has kept mum. But during an interview with Rolling Stone about the 20-year anniversary of the release of their much-loved 1997 album, "OK Computer," Yorke replied to his colleagues and critics.

"There are people I admire [who have been critical of the concert] like [English film director] Ken Loach, who I would never dream of telling where to work or what to do or think," Yorke said. "The kind of dialogue that they want to engage in is one that's black or white. I have a problem with that. It's deeply distressing that they choose to, rather than engage with us personally, throw shit at us in public."

Yorke fumed at what he perceived as disrespect shown by the BDS movement toward him and his bandmates.

"This is the first time I've said anything about it… it's really upsetting that artists I respect think we are not capable of making a moral decision ourselves after all these years. They talk down to us and I just find it mind-boggling that they think they have the right to do that."

"It's deeply disrespectful to assume that we're either being misinformed or that we're so retarded we can't make these decisions ourselves. I thought it was patronizing in the extreme. It's offensive and I just can't understand why going to play a rock show or going to lecture at a university [is a problem to them]."

Yorke mentioned that the band's guitarist, Jonny Greenwood, is married to an Arab Jew. "All these people to stand there at a distance throwing stuff at us, waving flags, saying, 'You don't know anything about it!' Imagine how offensive that is for Jonny. And imagine how upsetting that it's been to have this out there. Just to assume that we know nothing about this. Just to throw the word 'apartheid' around and think that's enough. It's fucking weird. It's such an extraordinary waste of energy."

"All of this creates divisive energy. You're not bringing people together. You're not encouraging dialogue or a sense of understanding."

Yorke also slammed the BDS movement for protesting speakers from going to speak at Israeli universities "Really? You can't go talk [at]… the one place where you need to be free to express everything you possibly can. You want to tell these people you can't do that? And you think that's gonna help?"

000000
Popular comments
What happened to the anti-appartheid movement ? All together ? Of course, South-Afrikans didn't own the media and show-business, it was less risky to oppose them !!!
Marques rouges
2 June 2017, 23:59 GMT2
000000
The guy has a point, who gets to decide moral questions if not the people who are most directly affected by them? Then again, licking Israeli government boots may have consequences.
stop the NATO wars
3 June 2017, 01:04 GMT2
000000
Newsfeed
0
New firstOld first
loader
LIVE
Заголовок открываемого материала
Access to the chat has been blocked for violating the rules . You will be able to participate again through:∞. If you do not agree with the blocking, please use the feedback form
The discussion is closed. You can participate in the discussion within 24 hours after the publication of the article.
To participate in the discussion
log in or register
loader
Chats
Заголовок открываемого материала
Worldwide
InternationalEnglishEnglishMundoEspañolSpanish
Europe
DeutschlandDeutschGermanFranceFrançaisFrenchΕλλάδαΕλληνικάGreekItaliaItalianoItalianČeská republikaČeštinaCzechPolskaPolskiPolishСрбиjаСрпскиSerbianLatvijaLatviešuLatvianLietuvaLietuviųLithuanianMoldovaMoldoveneascăMoldavianБеларусьБеларускiBelarusian
Transcaucasia
ԱրմենիաՀայերենArmenianАҧсныАҧсышәалаAbkhazХуссар ИрыстонИронауОssetianსაქართველოქართულიGeorgianAzərbaycanАzərbaycancaAzerbaijani
Middle East
Sputnik عربيArabicArabicTürkiyeTürkçeTurkishSputnik ایرانPersianPersianSputnik افغانستانDariDari
Central Asia
ҚазақстанҚазақ тіліKazakhКыргызстанКыргызчаKyrgyzOʻzbekistonЎзбекчаUzbekТоҷикистонТоҷикӣTajik
East & Southeast Asia
Việt NamTiếng ViệtVietnamese日本日本語Japanese中国中文Chinese
South America
BrasilPortuguêsPortuguese
NewsfeedBreaking
21:11 GMTZemmour Says He 'Would Like' to Withdraw France From NATO
19:50 GMTIsraeli Deputy Defence Minister Dodges Question About Tel Aviv's Complicity in Natanz Blast
18:38 GMTCorridors of POWDER: Brits React to News of Drug Sniffer Dogs in Parliament
18:26 GMTMercedes' Hamilton Takes Win in First Saudi Arabian GP After Chaotic Battle With Verstappen
18:02 GMTTucker Carlson Was Reportedly Friends With Hunter Biden, Intervened in Media Report on His Behalf
17:44 GMTPutin: People Vaccinated With Sputnik V Should Not Be Deprived of Right to Travel
17:02 GMTPolish Authorities Officially Confirm Detention of Russian Ship Ruslana
16:36 GMTBelgian Police Use Tear Gas After Clashes With COVID-19 Protesters Broke Out in Brussels - VIDEO
16:28 GMTTrump's Media Company Says Raised $1Bln From Investors
16:19 GMTOrigin of Water on Earth: Mystery Solved?
16:16 GMTIdentity of Baroness Mone's Accuser Reportedly Revealed as She Denies Racist Claims Against Her
15:47 GMTSniffer Dogs Could Be Deployed in UK Parliament as Cocaine Found Near PM’s Office, Report Says
15:35 GMTDemocrats Were Wrong After All: IRS Data Reportedly Shows Trump Tax Cut Benefited Middle Class Most
15:02 GMTOvechkin Repeats NHL Record of Scoring 20 Goals in 17 Consecutive Seasons
14:36 GMTUK Justice Sec Raab 'Not Convinced' of 'Strait-Jacket' Vaccine Mandates
14:24 GMTBBC Reportedly Threatened With Contempt of Court Over Refusal to Disclose Info About Diana’s Letter
14:23 GMTBelarus' Defense Ministry Hands Note to Ukraine's Diplomat Over Air Border Crossings
14:05 GMTEU's Borrell Says Brussels Working to Forestall Conflict Between Russia and Ukraine
14:03 GMTDefiant Tory MPs Slam Govt's Plans to Repel Migrant Boats Crossing Channel, Propose Alternative
13:34 GMTVery Special Fashion: 'Let's Go Brandon' Store Opens in Massachusetts