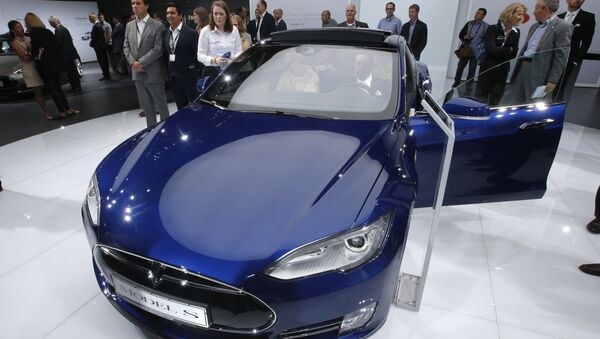 © AP Photo / Michael Probst
Subscribe
International
India
Africa
A female engineer has been fired by Tesla after claiming that she faced "unwelcome and pervasive harassment" as well as sexual discrimination at the electric car manufacturer. The engineer says that she was fired as retaliation for her allegations; Tesla claims to have fired her after an investigation concluded she was lying.

AJ Vandermeyden, 33, claimed that she was subjected to "inappropriate language, whistling, and catcalls" at Tesla. She also says that she was passed up for promotions in favor of less-qualified men, that she and other women were paid less than men doing similar work, and that she was punished for blowing the whistle on manufacturing defects.

She made these claims while still employed at Tesla. "Until somebody stands up, nothing is going to change," she said in a February interview with The Guardian. "I'm an advocate of Tesla. I really do believe they are doing great things. That said, I can't turn a blind eye if there's something fundamentally wrong going on."

Tesla replied by hiring what they called a "neutral, third party expert" to investigate her claims. This expert found no evidence of Vandermeyden's claims. "Despite having no engineering degree, she sought and was given successive engineering roles over more qualified candidates," Tesla wrote in a statement.

"Despite repeatedly receiving special treatment at the expense of others, Ms. Vandermeyden nonetheless chose to pursue a miscarriage of justice by suing Tesla and falsely attacking our company in the press. After we carefully considered the facts on multiple occasions and were absolutely convinced that Ms. Vandermeyden's claims were illegitimate, we had no choice but to end her employment at Tesla."

Vandermeyden's lawyer, Therese Lawless, criticized the investigation and called the firing retaliatory. "We did not believe that it was a comprehensive report… We vehemently disagree with their finding."

"They've just proven our case. It's clear retaliation. Somebody is trying to instill in employees that when they speak out about matters they are legally allowed to speak out about, they too will be fired." Lawless said that she intends to file a formal retaliation complaint with the state of California.

When asked as to why other female Tesla employees did not echo Vandermeyden's complaints, Lawless replied that it's "very difficult for women to come forward. They're concerned that their career is going to be hindered or jeopardized."

"The termination was based on Ms. Vandermeyden behaving in what the evidence indicates is a fundamentally false and misleading manner, not as a result of retaliation for the lawsuit," Tesla fired back.

They also said they "conducted a thorough internal investigation" and "extensively re-reviewed all the facts," and time and again they found that Vandermeyden's allegations were false.

While other Silicon Valley tech companies like Uber and Google have been plagued with allegations of sexism, Tesla has avoided them for the most part. Instead, criticism of them has been centered around allegations of unsafe and overly demanding work practices.

By his own admission, Tesla CEO Elon Musk says that the company culture at Tesla encourages long work hours and a demanding level of commitment. In the company's early days, Musk claims that he slept on the factory floor. "Tesla has to be hardcore and demanding, not for the hell of it, but because we are fighting for a good cause against giant, entrenched competitors who just want the status quo to continue," Musk wrote in a late May email to employees.

"The list of companies that want to kill Tesla is so long, I've lost track — a week doesn't go by without some 'Tesla Killer' article. The only way for a little company to prevail against those much larger companies is to work faster, smarter and harder."

The Guardian reported in May 2017 that more than 100 ambulances had been dispatched to Tesla's California factory since 2014 to care for workers suffering from fainting spells, seizures, dizziness, abnormal breathing and chest pains.

In April 2017, the United Automobile Workers union filed charges against Tesla with the National Labor Relations Board. They alleged that the company illegally surveilled and coerced workers to prevent them from unionizing. Tesla called the allegations "entirely without merit."