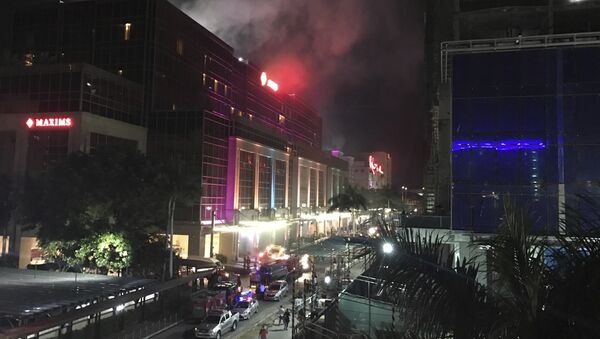 Asia
Manila Attack May Have Been 'Robbery' and Not Daesh-Linked Terror Attack
MOSCOW (Sputnik) — Security measures have been stepped up in the Philippine capital of Manila following a gunman attack and fire at the Resorts World Manila hotel and casino, claiming the lives of 36 people, National Security Adviser Hermogenes Esperon said on Friday.

"We are not discounting the possibility of even a small-scale terror attack in Manila. That's why security forces had been in high alert… Let us be calm but at same time be alert, ready to help our security forces," Esperon said, as quoted by CNN Philippines.

The administration of the complex denied any responsibility of its security guards for the incident, saying they did not resist the armed intruder in order to prevent any escalation of the situation, according to the broadcaster.

The armed attacker opened fire at the casino complex and set casino tables on fire, which led to casualties due to toxic smoke. A total of 36 people were found dead, besides the perpetrator, who committed suicide.

Daesh claimed responsibility for the attack, but police were considering robbery as a possible cause since the gunman "ransacked" the casino storage room and grabbed $2.6 million worth of gambling chips.