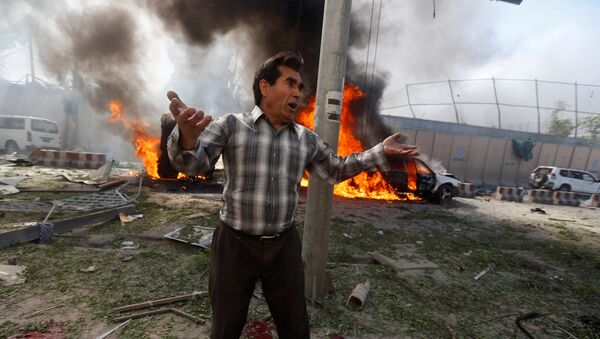 Pakistan on Thursday rejected allegations that Pakistani security agency was involved in the recent deadliest attack in Kabul that killed nearly 80 people and injured 350 others.

No group has claimed responsibility for the blast. Taliban had denied involvement.

The Pakistani Foreign Office strongly rejected as baseless the Afghan allegations that Pakistan is behind the recent terrorist attack in Kabul.

"The accusatory approach is unhelpful towards efforts to peace," Foreign Office Spokesperson Nafees Zakaria said at his weekly briefing.

"Pakistan itself has suffered immensely from terrorism and it has given unparalleled sacrifices in the war on the menace."

He said Pakistan has the highest stakes in Afghan peace and stability more than any other country of the world.

"Our commitment to peace in Afghanistan is based on sincerity and is beyond any doubt. However, it is disappointing that certain elements which have no interest in Afghan peace want to damage relations between the two neighboring countries," the spokesman said.

Terrorists Used Some 1.5 Tonnes of Explosives in Kabul Attack - Reports

"They are trying to malign Pakistan for their vested agenda. The onus of setbacks in Afghanistan cannot be put on Pakistan or others," Zakaria said.

He said Pakistan believes in politically negotiated settlement of Afghan issue as there is no military solution to the conflict.

This article originally appeared in the Global Times.