US Guilty of Working With Iraqi Militia Accused of Torturing, Killing Civilians 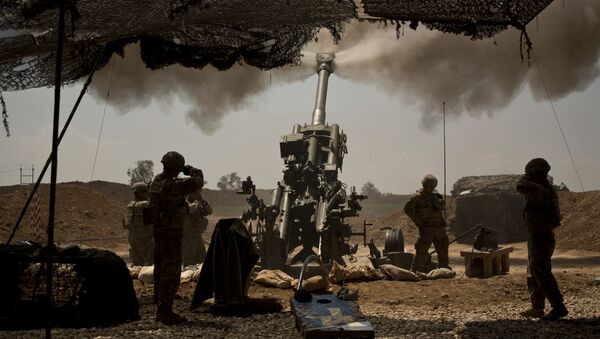 © AP Photo / Maya Alleruzzo
Subscribe
The US military continues to assist an Iraqi unit that has been banned by US Congress from receiving training and equipment due to human rights abuses.

Members of the Emergency Response Division (ERD), which was put on the blacklist by US Congress in 2015, were photographed torturing and killing civilians in Mosul last year. However a spokesman for the US military said that "the ban does not prevent the US from working with the ERD, as we do with other elements of the Iraqi security forces, to help a coordinated effort among different elements of the ISF in the fight to defeat ISIS [Daesh] in Mosul."

The ERD was put on the blacklist under a US law called the Leahy Law. The law stipulates that non-US armed forces are prohibited from getting military support if "there is credible information that such a unit has committed a gross violation of human rights."

International human rights organizations, such as Human Rights Watch, have derided the US' continued association with the group, saying that "the US is dangerously close to complicity" in the group's crimes.

"The US government is playing a clunky shell game, pretending to move its assistance away from abusive Iraqi units like the ERD, while still working with them, training them and coordinating with them," Sarah Leah Whitson, the Middle East Executive for Human Rights Watch is quoted as saying.

In January, 2016, US army colonel Brett Sylvia, said that the ERD is a "very effective fighting force." Following this, a US major general, Joseph Martin, who is said to be one of the most senior commanders in Iraq, tweeted his support for the ERD.

Since launching the bid to retake Mosul from Daesh control, the Iraqi government has sanctioned predominantly Shia paramilitaries to fight alongside its national army.

The paramilitaries have been accused of sewing the seeds of sectarianism by carrying out atrocities against Sunni civilians in areas liberated from Daesh. The militias are known for the extrajudicial killings of Sunnis who they believe are guilty of working in cahoots with Daesh.