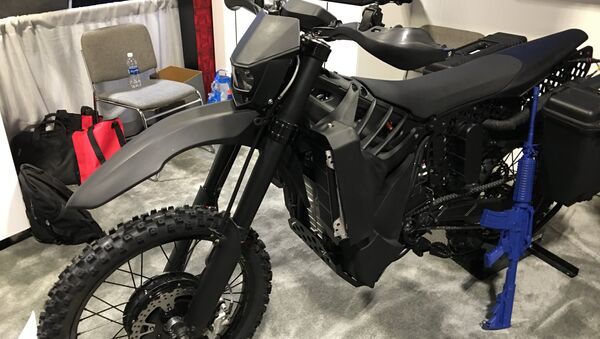 © Logos Technologies
Subscribe
Logos Technologies, the company hard at work on prototypes for electric military motorcycles for the Defense Advanced Research Projects Agency, said that the ultra-quiet two-wheelers are near completion.

"The idea is to have two test motorcycles," Doug Rombough, vice president of business development for Logos, told Stars and Stripes. The vehicles, which will also carry equipment, will be equipped with front-wheel drive.

Since 2015 Logos has been developing the hybrid electric dirt bike known as the SilentHawk, and is also making progress on a multi-fuel hybrid with an air-cooled engine, as well as an all-electric motorcycle.

The SilentHawk’s drive system will make it easier to start the vehicle on a steep hill, which for a conventional motorcycle is typically a difficult task, according to lead engineer Alex Dzwill.

He said, "On a typical dirt bike you would use a ton of power trying to move in sand … With the front-wheel drive you can climb out of it without using too much power."

The recreation dirt bike on which the SilentHawk is based was created by Alta Motors in California. It weighs 267 pounds and costs $15,000.

Dzwill said that on off-road terrain the bike has a range of 40-50 miles, which increases to 170 miles once a multi-fuel generator is added. He also noted that it will be able to power electronic equipment in the field and that the range extender will be easy to remove and replace.

Rombough said, "Soldiers could be sitting on a hill and top up the battery with the generator and charge up other gear … They are carrying more and more equipment that has to be powered so it’s a great benefit."

He added that the US Marine Corps and Army, as well as foreign militaries have expressed interest in the SilentHawk, though Logos still has a year to develop the vehicle.

"The DARPA program calls for a lightweight, rugged, single-track vehicle that can operate near-silently for extended periods while transporting small numbers of troops over hostile terrain," according to Logos. "Operators will benefit from the near-silent capability and ease of operation of an all-electric vehicle, along with the adaptable power generation and extended range of a multifuel internal combustion engine. The bike will also offer the capability to provide supplemental power for electric devices in the field."

000000
Popular comments
This kind of scouting vehicle has been tried many times before and failed because the driver was unaware of their surroundings as they drove while the speed of the vehicle got you into trouble much faster because you are focused on driving and not on your surroundings and who is hiding in them....foot patrol or mini drone much more effective.