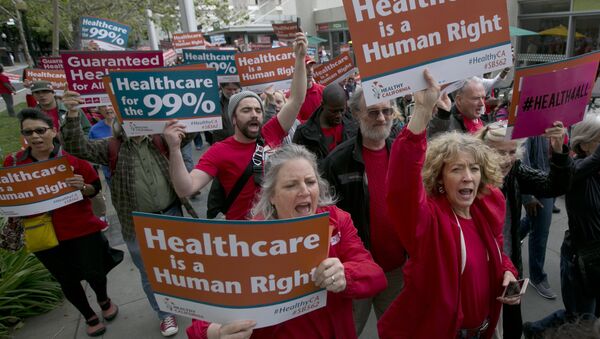 Grant Ferowich
All materials
A coalition of California lawmakers is advancing a state-wide universal health care proposal even though comparable efforts in Vermont and Colorado fizzled out. Averting a "collision course" of soaring medical expenses may depend on it, State Senator Ricardo Lara argues.

On Thursday, the California Senate passed Bill 562 to enact wholesale reform of the health care system. It would do away with Obamacare as well as whatever US President Donald Trump markets as a "replacement" for it (non-partisan estimates show 23 million people wouldn’t be able to go to a doctor or have insurance under the American Health Care Act, which the president definitely doesn’t want called TrumpCare).

"There would be no insurance premiums. No out-of-pocket costs for prescription drugs. No more deductibles," the Sacramento Bee explained.

"California can get a lot more for our money when the Legislature passes the Healthy California Act. We will actually spend less than we do on health care; families will pay less," Lara told reporters Wednesday.

The bill will now go to the State Assembly.

A single-payer system could lower total health care spending in California by about 18 percent, according to economists at the University of Massachusetts-Amherst. On their account, single-payer would run the state about $331 billion. Right now, federal, state and private entities drop a combined $404 billion on healthcare in California, even though fewer people have access to doctors than they would under the proposed legislation.

Lawmakers want to fund the initiative via a 2 percent tax hike on non-essential consumer goods like new cars and fine dining, the Sacramento Bee reports. The second source of financing would come from a 2.3 percent tax on businesses generating more than $2 million in revenues annually.

The bill has yet to persuade all stakeholders, notably local businesses and health insurers like Kaiser Foundation Health Plan, one of the largest not-for-profit organizations in the US. “With everything going on in DC, I understand the desire to meet crazy with crazy. But that’s just what we’re doing here,” Michah Weinberg, president of the economics arm of the business-backed Bay Area Council, told the Bee.

Progressives struck out at the ballot box in 2016 in state and federal legislating bodies, and Colorado voters’ decisive rejection of their proposed single-payer system, Amendment 69, only added salt to the wound. In 2014, Vermont Gov. Peter Shumlin had to shut down his state’s Medicare-for-all system before it could take effect.

“If cobalt blue Vermont couldn’t find a way to make single-payer happen, then it’s very unlikely that any other state will,” Jack Mozloom of the National Federation of Independent Business told Politico.

But single-payers’ supporters think the system’s financial and human benefits will be evident once a state manages to put it into place.

“Whichever political party decides to champion this, it’s going to be a huge win for them,” Dr. Margaret Flowers, co-founder of Popular Resistance, told Eugene Puryear on Radio Sputnik’s By Any Means Necessary. "I don’t care whether it’s the Democrats or the Republicans," Flowers said with a chuckle.

​The bill’s proponents must have thrown the rear view mirror out the window, because they are not looking backward. “I took this on because it is a right that I believe people should have,” says Senator Toni Atkins of San Diego. “I’m more convinced of that today than I ever have been.”