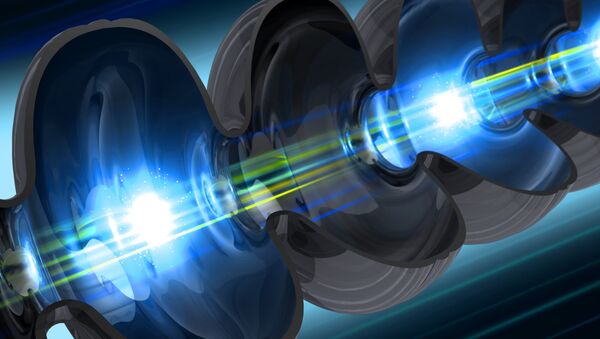 When you have something that powerful, you want to shoot it at stuff. The physicists used the LCLS laser on a single iodine atom that was bound to a methyl molecule (comprising one carbon and three hydrogen atoms), firing a beam 1,000 times thinner than a human hair at it. They weren't sure what would happen to such a molecular formation when struck with a laser of this magnitude.

The x-ray radiation stripped away the electrons from the atom, as expected. But the huge amounts of energy hitting the atom caused the iodine to violently pull electrons away from the methyl group to replace the ones it had lost.

The physicists didn't think that was going to happen, according to study co-author Daniel Rolles at Kansas State University. He compared the iodine atom's activities to a "molecular black hole" in a Wednesday statement about the experiment.

"When, say, a star is close to a black hole, the gravitational pull of the black hole causes a transfer of matter [away] from the star," explained Robin Santra, a physicist at the University of Hamburg. "It is known that when this happens, not only is matter sucked into the black hole, but there is also the ejection of strong jets of matter away from the black hole."

"The situation we have observed is similar. The high-intensity x-ray pulse causes the iodine atom… to lose a considerable number of its electrons. The highly positively charged iodine atom now behaves like a black hole: It uses its extremely strong electric pull to suck in electrons from the rest of the molecule."

If it was a black hole, it was one on the smallest possible scale. It involved a single molecule and occurred in a teensy fraction of a time: 30 femtoseconds, or 1/33 trillionth of a second. The force also was an electrochemical pull, rather than the powerful gravity exhibited by black holes in space.

This is a useful and powerful technique, the only problem being that, "when you do [it], you damage the structure you want to look at," said Rolles. "Our study tries to quantify this radiation damage on the microscopic level."

Electron theft like this doesn't happen in nature because of the outrageous amounts of power needed for it to happen. "For any type of experiment you do that focuses intense X-rays on a sample, you want to understand how it reacts to the X-rays," Rolles said in a press release. "This paper shows that we can understand and model the radiation damage in small molecules, so now we can predict what damage we will get in other systems."

000000
Popular comments
interesting report
michael
2 June 2017, 01:58 GMT
000000
Cool. But I notice that even in the most scientific and noble experiment, humans are to shoot at something (or someone), no matter what. There is no hope for humans.
Athanasios
2 June 2017, 08:06 GMT
000000
Newsfeed
0
New firstOld first
loader
LIVE
Заголовок открываемого материала
Access to the chat has been blocked for violating the rules . You will be able to participate again through:∞. If you do not agree with the blocking, please use the feedback form
The discussion is closed. You can participate in the discussion within 24 hours after the publication of the article.
To participate in the discussion
log in or register
loader
Chats
Заголовок открываемого материала
Worldwide
InternationalEnglishEnglishMundoEspañolSpanish
Europe
DeutschlandDeutschGermanFranceFrançaisFrenchΕλλάδαΕλληνικάGreekItaliaItalianoItalianČeská republikaČeštinaCzechPolskaPolskiPolishСрбиjаСрпскиSerbianLatvijaLatviešuLatvianLietuvaLietuviųLithuanianMoldovaMoldoveneascăMoldavianБеларусьБеларускiBelarusian
Transcaucasia
ԱրմենիաՀայերենArmenianАҧсныАҧсышәалаAbkhazХуссар ИрыстонИронауОssetianსაქართველოქართულიGeorgianAzərbaycanАzərbaycancaAzerbaijani
Middle East
Sputnik عربيArabicArabicTürkiyeTürkçeTurkishSputnik ایرانPersianPersianSputnik افغانستانDariDari
Central Asia
ҚазақстанҚазақ тіліKazakhКыргызстанКыргызчаKyrgyzOʻzbekistonЎзбекчаUzbekТоҷикистонТоҷикӣTajik
East & Southeast Asia
Việt NamTiếng ViệtVietnamese日本日本語Japanese中国中文Chinese
South America
BrasilPortuguêsPortuguese
NewsfeedBreaking
19:00 GMTFrom Trade to Space Cooperation: Highlights of Putin-Modi Talks at 21st India-Russia Annual Summit
18:39 GMTEx-DC National Guard Official Slams Testimonies of Pentagon Generals on 6 January as Absolute Lies
18:23 GMTDems Growing Increasingly Concerned by Midterm Prospects as Biden Polling Numbers Drop
18:21 GMTWhite House Confirms US Will Not Send Representation to 2022 Winter Olympics in Beijing
17:32 GMTKorean Treat and Eurovision Winner Among Most Mispronounced Words of 2021
17:24 GMTWhitehall Union Claims Victory After Court Dismisses its Case Against Johnson and Patel
17:14 GMTPope Francis Stumbles on Airstair as He Boards Plane in Greece - Video
17:02 GMTTrump’s Social Media Listing Vehicle Says Under Inquiry From US Securities Investigators
16:47 GMTRussia, Egypt Start Naval Phase of 'Bridge of Friendship-2021' Drills in Mediterranean
16:40 GMTUS Reportedly Mulls Cutting Russia Off SWIFT, Sanctioning Energy Producers & 'Putin's Inner Circle'
16:37 GMTFinland’s PM Parties at Nightclub Until 4am After Contact With COVID-Positive Official
16:14 GMTSecond Week of Ghislaine Maxwell Sex Scandal Trial Kicks Off
15:56 GMTBoost for Britain! Is the UK’s COVID-19 Third Jab Campaign Saving Lives?
15:55 GMTWestminster Preparing 10-Year War on Drugs in Attempt to Defeat County Line Gangs
15:44 GMTIsrael Will Reportedly Push US to Strike Iranian Facility Amid Lack of Progress in Vienna Talks
15:41 GMTAmerica Unveils First-Ever Strategy to Battle Corruption at Home and Abroad
15:30 GMTChina May Build Military Base in Equatorial Guinea Amid Beijing’s Tensions With Washington
15:15 GMTKremlin: Putin Will Listen to Biden's Proposals on Ukraine 'With Great Interest'
15:15 GMTNYC to Use 'Preemptive Strike' Against Omicron With Vaccine Mandate for all Businesses, Mayor Says
15:08 GMT3,000 Security Officers Guard India's Mathura as Hindu Group Threatens to Install Idol in Mosque