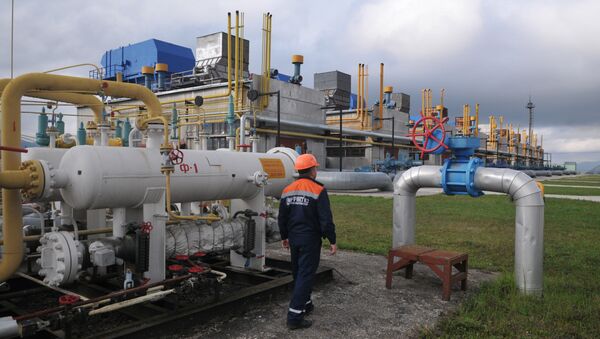 According to the Ukranian ministry's draft strategy, Ukraine will not importing Russian gas until 2035.

World
Why Russia's Gazprom Plans to Slash Volumes of Its Gas Transit Through Ukraine
KIEV (Sputnik) — The Ukrainian Energy Ministry sees no need in importing Russian gas until 2035, the ministry's draft strategy published on its website Thursday states.

A table provided in the strategy notes that Russian gas imports totaled 6.1 billion cubic meters of gas in 2015 to balance demand, followed by zeroes under the years 2016-2035.

The Ukrainian ministry's strategy also notes that no more than 30 percent of gas should be imported from a single source.

Moreover, the Ministry of Energy and Coal Industry of Ukraine expects Russian gas transit to remain at 50-80 billion cubic metres a year until the contract with Gazprom expires, but is afraid it may fall to 15-40 billion cubic metres due to Russian companies using different routes of transporting fuel, the draft economic strategy of Ukraine, published Thursday, reads.

"There is strong probability that the volumes of Russian gas transit will stay in the range of 50-80 billion cubic metres annually until 2019," the document reads.

World
Russia, Ukraine May Meet for New Round of Gas Pricing Talks in February
According to the ministry, the Stockholm arbitrage on the transit contract between Russian and Ukrainian energy companies, Gazprom and Naftogaz, is underway, while the Russian company continues using alternative routes to transport gas to Europe, which "does not permit to forecast the continuation of transit volumes of Russian gas through Ukraine’s gas transportation system.

"It is likely that, only thanks to the sanctions regime and restrictions against Russia and Gazprom and actions of the European Commission, preservation of the Ukrainian route for gas supplies is possible at the volume of 15-40 billion cubic metres annually (first of all in the southern direction – to the Balkans) until the Turkish Stream is put into operation in 2019," the document reads.