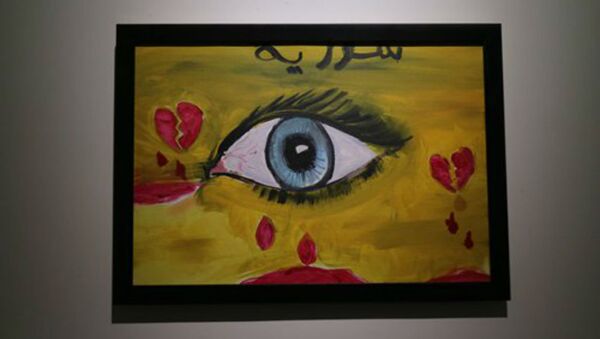 © Global Times
Subscribe
Fourteen paintings drawn by Syrian refugee children were exhibited at the Zhong Gallery in downtown Beijing Friday. Although the colorful artworks may look like nothing more than children's doodles, exhibition curator Fan Yueying explained that the stories behind them are heartbreaking.

"You see here a sweet mother-child portrait," said Fang, pointing to the painting Mother and Daughter by Hatice M. "But it actually portrays the girl's bitter memories about her happy life in Syria before the war broke out."

The 20-year-old girl is not a professional curator, but a sophomore from Peking University who works part time at the Common Future Fund (CFF), a Chinese international volunteer project under the guidance of China's Children and Teenagers' Fund and the Chinese Initiative on International Law.

A college student-run NGO in China specializing in offering aid to Syrian refugee children, CCF has attracted some 100 university students in China like Fan since it was founded in late 2016.

Currently on its second national tour, the exhibition is part of a Syrian refugee child-care effort initiated by CFF and the Association for Solidarity with Asylum Seekers and Migrants (ASAM), a UNHCR partner.

The paintings on display were brought back by CFF volunteers from refugee community service centers in Turkey, which has sheltered the largest group of Syrian refugees in the world.

"I was moved because even though the children there had experienced so much hardship and cruelty, they were still positive about life and the future," said Yang Ken, adding that they brought back more than 40 paintings. The 25-year-old International Law major from Peking University is one of two CFF volunteers who helped bring back the paintings in February.

He and his teammate Ma Yuan, a Peking University student with a good mastery of Arabic and Persian, were in Turkey for two weeks to carry out research for an upcoming CFF volunteer project in Nizip, a small town in southeastern Turkey.

"We tend to cooperate with local community service centers to launch volunteer activities and someone suggested that we conduct activities targeting both Syrian and Turkish children and teenagers, rather than focusing on just one group," said the law student.

Yang said hopefully their research will help the team implement some other projects aside from the exhibition, such as the Aiding Refugee Child Scavengers project (teaching child scavengers how to treat any cuts they get while searching through trash) and the Donating Camera project (collecting second-hand cameras and donating them to Syrian child refugees).

"Cameras, like paint brushes, are a good way to help children express their thoughts about their lives and their country," he said. "Art may be a just a pastime for people living in peaceful places, but it is a necessity for these children."

Yang said he was most impressed by the great photos he saw in Turkey taken by a teen refugee who fled Syria to escape being imprisoned by local tribal militants. "The boy said he wanted to depict Syrian stories with his photos and show that not all Syrians are terrorists," Yang recalled.

In July, a second group of selected CFF volunteers will embark on another trip to Turkey, which the team members mentioned excitedly about during their interviews with the Global Times.

"People who speak out against taking in Syrian refugees may not do so when they see for themselves what they are like," Yang told the Global Times. "They are just ordinary people like you and me."

Zhang Yue, a 2017 graduate from Beijing City University who is now CFF's marketing manager, told the Global Times that she sympathizes with Syrian refugees due to her personal experiences during the Urumqi riots that took place on July 5, 2009.

"I want to do as much as I can to help relieve their pain, since I know how bad it feels when innocent civilians fall victim to certain interest groups," said the 20-something woman from Northwest China's Xinjiang Uyghur Autonomous Region.

Zhang told the Global Times that since CFF opened an account on Facebook, people from Hong Kong, Taiwan and overseas have been leaving messages asking about the project. "I'm really proud to see more and more people pay attention to what we are doing," she said.

Friday's show attracted many visitors, including a good number of children and their parents. Quite a few visitors stopped in front of My Younger Brother's Pal. The painting is divided into two sections, on one of which lies a child's bloody palm print.

"The line dividing the paper into two parts probably represents the division of the painter's inner world," Zhu Gaowen, head of the Zhong Gallery and a veteran in the art field, told the Global Times. "I was moved by the child's inner strength," he said.

Zhu said that they have only displayed 14 of the more than 40 paintings brought back due to the gallery's limited space. He handpicked all of the paintings on display, choosing the ones he felt were the best when it came to skill, coloring and the message it is trying to convey.

According to the team, the exhibition will move to more cities including Shanghai and Hong Kong later this year, during which time some of the other more than 40 paintings will be displayed to the public.

This article by Huang Tingting was originally published in the Global Times.