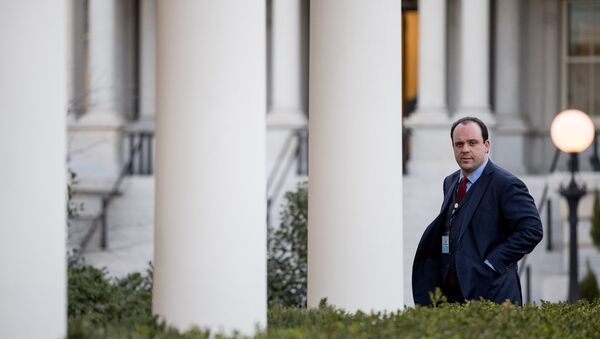 The Congressional investigation of Russia’s alleged interference in the 2016 United States presidential election has added another Donald Trump’s associate, Boris Epshteyn who was born in Moscow.

According to ABC News, Former White House press officer Boris Epshteyn received a "voluntary request" from the US House of Representatives Intelligence Committee for information in connection with the investigation.

"Like many others, Mr. Epshteyn has received a broad, preliminary request for information from the House Intelligence Committee," Epshteyn's lawyer told ABC News in a statement on Tuesday. "This is a voluntary request. Mr. Epshteyn has not been subpoenaed nor do we anticipate that he will be."

The lawyer's statement continued: "We have reached out to the Committee with several follow up questions and we are awaiting their response in order to better understand what information they are seeking and whether Mr. Epshteyn is able to reasonably provide it."

Who is Boris Epshteyn?

Epshteyn was born in 1982 (according to other sources, in 1983) in Moscow. In 1993, he immigrated with his family to the United States. In 2004, he graduated from the School of Foreign Service at Georgetown University. In 2007, he graduated from the Georgetown University Law Center with a law degree. During his years in the university, Epshteyn met Donald Trump’s son Eric.

Why US 'Russian Interference' Probe Investigates Trump's Former Press Aide
Epshteyn started his business career in New York City, where he worked on securities and bank finance in several banks and companies. He debuted as a political strategist in 2008 during John McCain’s presidential campaign.

It is believed that his relationship with Eric Trump was behind Epshteyn’s rise into the entourage of the US president. During Trump’s presidential campaign, Ephsteyn served as a senior adviser to Trump. After Trump took office Epshteyn was appointed a special assistant in the presidential administration. He coordinated White House officials speaking to media on the president’s behalf.

Ex-Trump Campaign Adviser Page Says Willing to Testify in Russia Probe
It was reported that Epshteyn wrote Trump’s controversial statement for Holocaust Remembrance Day in January, which did not mention the Jewish people. Responding to criticism, White House Press Secretary Sean Spicer said that the statement was written by an "individual who is both Jewish and the descendant of Holocaust survivors."

In March, Epshteyn received an appointment in the White House’s press service but at the end of the month it was reported that he was resigning.

In mid-April 2017, Epshteyn was hired by Sinclair Broadcast Group as its senior political analyst. The company is the largest television station operator in the US by total coverage and is known for its conservative views.

In a recent interview with ABC News, Epshteyn said that he did not know anything about Russia’s alleged attempt to meddle in the US election.

"You would have to ask Russia if they tried to meddle. […] Whether there was an attempt at meddling, again, how would I know? Again, if you have a problem with how the president is handling his foreign policy, you can speak at the ballot box in three and a half years," Epshteyn said.

Media also reported that in October 2013, Epshteyn moderated a panel at the "Invest in Moscow!" conference in New York City. He was also accused of pro-Russian statements allegedly made on Trump’s behalf. It was also criticized for an interview with CNN in which he said that Russia did not annex Crimea as well as for supportive statements about Russian President Vladimir Putin.

Outside Counsel to Answer All Questions About Trump-Russia Probe
Epshteyn is the sixth Trump associate who is being examined by Congress in its investigation.

The first one was Gen. Michael Flynn, who briefly served as Trump’s National Security Adviser. Due to accusations of Russia connections, Flynn resigned after he admitted that he misinformed Vice President Mike Pence on his contacts with Russian Ambassador Sergei Kislyak.

Trump’s personal attorney Michael Cohen has also been asked to testify about his contacts with Russian officials, ABC News reported.

Finally, Jared Kushner, Trump’s son-in-law, could also be asked to provide information and a testimony. In particular, media claimed that Kushner suggested establishing a secret communications channels with Moscow during a meeting with Kislyak.

Trump’s Public Enemy, Ex-CIA Chief Slams Kushner-Moscow Conspiracy
On Wednesday, The Wall Street Journal reported that the US House Intelligence Committee issued seven subpoenas in connection with its investigation into Russia’s alleged meddling in the US election. According to the report, four subpoenas were related to the Russia probe, and three on the issue of why names of Trump’s associates were "unmasked" by the Barack Obama administration

Russian officials, including President Vladimir Putin and Foreign Minister Sergei Lavrov, have repeatedly said that Russia doesn not interfere in the internal affairs of foreign states, including the US presidential election.