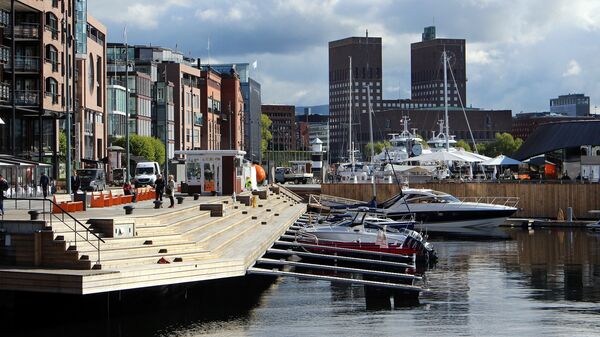 Last week's cooling between the US and the EU, exacerbated by Angela Merkel's call on fellow Europeans to "take their fate into their own hands," have been widely seen as signs of discord in NATO. For lesser NATO member states it may become inevitable to take sides.

Norway Holds Its Tongue About Alleged Military Presence in Syria
Earlier this week, German Social Democrat Foreign Minister Sigmar Gabriel added fuel to the fire by claiming that NATO has been "weakened" and accused the US of acting "to the detriment of the EU's interests," including selling weapons to Saudi Arabia.

For dutiful NATO member Norway, the frictions within the alliance are indeed bad news. The Norwegian is heavily supported by the US at the same time when Oslo is stepping up its cooperation with fellow Nordic countries.

"We are totally integrated with the US. The US is and remains the only allied country capable of offering any special support. This is the reality of realpolitik," Karsten Friis, a researcher from the Norwegian Institute of International Affairs (NUPI), told the Norwegian newspaper Klassekampen.

Harsh Cold, Not Russia US Marines' Enemy in Norway
According to him, there are no indications that NATO is about to break down any time soon. Nevertheless, he argued that Norway should keep a close eye on the situation.

"How things are today is one thing, but how things will evolve is another. A security policy oriented on Europe is becoming increasingly important in the years to come," Karsten Friis said, advocating a closer Nordic cooperation, as well as closer ties with Germany. According to Friis, the US and Europe may develop different priorities, which may prompt closer integration in Europe, which Norway would gladly join.

According to Kate Hansen Bundt, Secretary-General of the Norwegian Atlantic Committee, Angela Merkel's sharp words rather reflected her annoyance after three days with Donald Trump than a new political reality.

"It is not true that an EU army is ready to take over should NATO be falling apart," Kate Hansen Bundt said, stressing the problems surrounding the strengthening of the pan-EU military cooperation. "When the Brits leave, the biggest obstacle disappears. On the other hand, though, Britain is one of NATO's strongest military forces, which is why they'll take away much of what is needed to build a strong defense," she added.

Two Birds With One Stone: Norway Hopes to Bolster Defense, Save Billions
Nor does Janne Haaland Matlary, a professor of political science at the University of Oslo believe that the EU-US alliance is about to break up.

"If there is an attack on a European country, the Americans will be there [to defend]," Janne Haaland Matlary said. Nevertheless, he emphasized the drastic need of boosting EU defense expenditure to be able to tackle Europe's own problems, even if the US remains a "major deterrent force." "It is obvious that Europeans cannot continue as free passengers," Janne Haaland Matlary said.

The EU military cooperation is still facing a number of problems, though. Today, the EU's defense industry is exempt from the common rules of free competition, and a number of EU member states retain protective legislature to prevent the loss of jobs.