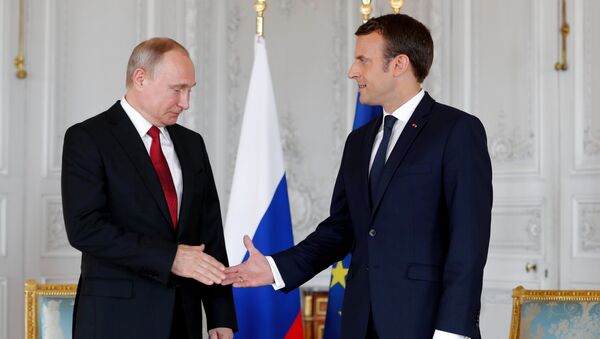 PARIS (Sputnik) — On Monday, Russian President Vladimir Putin paid an official visit to France at the invitation of Macron to discuss bilateral relations, as well as a range of issues on the international agenda. This was the first meeting of the two leaders after the French president assumed office.

"What is the difference [between Macron's policy and the one of] Francois Hollande? Will we lift sanctions which had an incredibly difficult consequences for our economy, our agriculture, yes or no? We are sticking to the same line as Hollande did. There is nothing new on the table, I don't see any specific decisions on the fight against terrorism, and that worries me a lot because there is not a single week when we don't hear about the terror attack," Le Pen told the France 1 radio, speaking about Putin's visit to France and its outcome.

The French politician added that Macron's plans to create a so-called "task force" to help tackle the terrorist threat are unlikely to bring positive results.

The relations between Moscow and Paris have deteriorated during the tenure of former French president, as France along with other western countries accused Russia of interference in the Ukrainian affairs and imposed anti-Moscow sanctions.