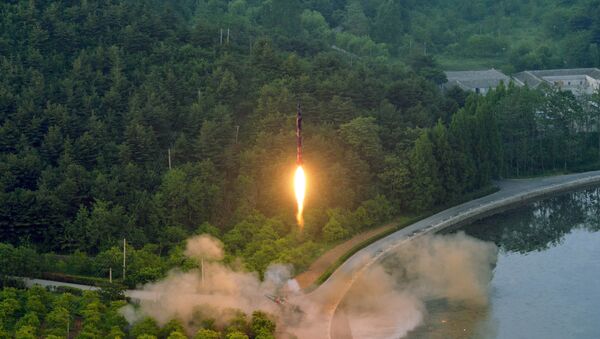 © REUTERS / KCNA
Subscribe
Japan called on China to play a more important role in containing the DPRK's nuclear missile program. Sputnik spoke with Russian experts about whether China will exert more pressure on North Korea and what the consequences could be of that for the whole region.

The Secretary of the National Security Council of Japan, Shotaro Yachi, told China’s State Councilor, Yang Jiechi, that Japan seeks to enlist the support of China in countering the missile launches of the DPRK, according to the Hong Kong newspaper South China Morning Post.

The request was made during the Sino-Japanese talks held in Tokyo.

"Japan and China need to work together to strongly urge North Korea to avoid further provocative actions and obey things like United Nations resolutions," Yachi was quoted as telling Yang, urging China to take on a bigger role.

S Korea, Japan Leaders Agree More Sanctions Against N Korea Necessary
Meanwhile, a recent missile test by the DPRK fell in the exclusive economic zone of Japan and it could cause Tokyo to put the North Korean threat at the center of the visit of a high-ranking Chinese official.

Moreover, it became known that the North Korean military tested a new high-precision missile guidance system with the personal participation of the leader of the DPRK Kim Jong-un.

All these factors are making Japan extremely anxious and forcing Japan to seek help from its regional neighbors including China.

Sputnik spoke with Russian experts about whether China will agree to help Japan in this.

An expert of the Institute of the Far East, Valery Kistanov, noted that Japan is quite certain that if a conflict with the DPRK breaks out it is Japan that will suffer the consequences and not the US. This fear is developing into nationwide hysteria, especially in the regions overlooking the Sea of Japan.

Moreover, it is becoming clear to Tokyo that the sanctions against the DPRK do not give the desired effect. It only strengthens the provocative actions of the DPRK.

Mattis: War With North Korea 'Would Bring Danger to Russia and China'
In Japan, the blame for this is shifted on China – sanctions do not give the desired effect because of their insufficient pressure on the DPRK. China's trade with the DPRK, according to Japan, is a threat that allows the North Korean command to survive.

Therefore, as Valery Kistanov noted, the Japanese insist “China goes till the end” and “strengthens the pressure.” But the question remains: How will China react to this pressure?

“China is unlikely to do this [increase pressure], because it will mean the collapse of the North Korean regime, its economic strangulation and China is not interested in that because further scenarios after the collapse of the regime are completely catastrophic,” Kistanov said.

He further said that even if it is a regime change by peaceful means China is afraid of three things. “What will happen to nuclear weapons in North Korea? The second problem is the massive inflow of North Korean refugees, including those to China. Thirdly, if the regime collapses and movement towards unification under the auspices of South Korea begins, then it is possible that the US troops will appear on the land border with China and that is a ‘red line’ that China cannot allow anyone to cross,” the analyst said.

Therefore, China is not interested in strangling the regime economically. China accounts for 90 percent of the DPRK's foreign trade, and it will not cut this link, which can turn into a complete catastrophe for the whole region.

However, each new missile test carried out by the DPRK intensifies China's irritation. China is no doubt concerned about the growing tensions in the region and increasing unpredictability of Pyongyang's policies.

An expert of the Institute of the Far East, Alexander Larin, drew attention to this, saying that Beijing is interested in having Tokyo as a partner, not as an opponent in solving the North Korean problem.

But if Tokyo's request for assistance in the strangulation of the Pyongyang regime is put forward then Beijing will never do it, Larin said.

“China would like Pyongyang to abandon the nuclear program and behave less militantly. But it is difficult to predict how North Korea will behave if China takes very stringent measures. China does not know how this can end, given the unpredictability of the North Korean regime,” Larin told Sputnik.

The analyst further said that China and North Korea have a special allied relationship and it would not like to spoil these relations and put them under attack.

Therefore, although it opposes the nuclear program of the DPRK, it does so with moderation, in reasonably restrained forms. In addition, China does not in any way want the case to look as if it succumbed to the pressure of the US and Japan on the North Korean issue.

“As a result, it [China] most likely will not abandon the old rhetoric and will continue persuading North Korea, rather than exerting some serious, severe pressure on it in addition to what it is already doing – restricting coal trade,” Larin concluded.

000000
Popular comments
China should not do the US and Japan's dirty work. Remember China what the Japanese did to you in World War II and remember what the US did to North Korea and China in the first Korean conflict. China is in a position to tell the US 4th Reich to go to the devil.
RostislavtheSoSo
1 June 2017, 15:58 GMT1
000000
China should rather ask the USA to remove all its soldiers from Korea. Once the American soldiers leave Korea, there will be no tension in Korea. There is a parallel between Korea and Vietnam. Korea was invaded by the USA in 1951 and Vietnam was invaded by the same USA in the 1969s. The American soldiers massacred millions of Koreans like they massacred millions of Vietnamese. The American soldiers are unable to conquer Korea like they were unable to conquer Vietnam. So they occupy part of Korea like they occupied part of Vietnam. They gave a different name to the part of Korea that they occupy (South Korea) like they gave a different name to the part of Vietnam that they occupied (South Vietnam). The Vietnamese then kicked out all the American soldiers from Vietnam in 1975. Since then, there is peace in Vietnam. In Korea too, peace will come to the country only after all the American soldiers will have been kicked out of the country.
Tolerance
1 June 2017, 17:11 GMT1
000000
Newsfeed
0
New firstOld first
loader
LIVE
Заголовок открываемого материала
Access to the chat has been blocked for violating the rules . You will be able to participate again through:∞. If you do not agree with the blocking, please use the feedback form
The discussion is closed. You can participate in the discussion within 24 hours after the publication of the article.
To participate in the discussion
log in or register
loader
Chats
Заголовок открываемого материала
Worldwide
InternationalEnglishEnglishMundoEspañolSpanish
Europe
DeutschlandDeutschGermanFranceFrançaisFrenchΕλλάδαΕλληνικάGreekItaliaItalianoItalianČeská republikaČeštinaCzechPolskaPolskiPolishСрбиjаСрпскиSerbianLatvijaLatviešuLatvianLietuvaLietuviųLithuanianMoldovaMoldoveneascăMoldavianБеларусьБеларускiBelarusian
Transcaucasia
ԱրմենիաՀայերենArmenianАҧсныАҧсышәалаAbkhazХуссар ИрыстонИронауОssetianსაქართველოქართულიGeorgianAzərbaycanАzərbaycancaAzerbaijani
Middle East
Sputnik عربيArabicArabicTürkiyeTürkçeTurkishSputnik ایرانPersianPersianSputnik افغانستانDariDari
Central Asia
ҚазақстанҚазақ тіліKazakhКыргызстанКыргызчаKyrgyzOʻzbekistonЎзбекчаUzbekТоҷикистонТоҷикӣTajik
East & Southeast Asia
Việt NamTiếng ViệtVietnamese日本日本語Japanese中国中文Chinese
South America
BrasilPortuguêsPortuguese
NewsfeedBreaking
10:11 GMTMoscow-Bound Egypt Air Flight Reportedly Returns to Cairo After Declaring Mid-Air Emergency
10:08 GMTHillary Clinton's Closest Aide Claims She Was Sexually Assaulted by US Senator, Media Says
10:06 GMTRussia Condemns French Information Doctrine as 'Social Networks Militarisation'
10:03 GMTUkrainian Forces Staged Drone Attack on Oil Tank Farm in Donetsk
09:58 GMTWashington Provides Assurances to UK That Assange Can Serve Any US-Imposed Sentence in Australia
09:55 GMTVideo: Angry Drivers Throw Ink at Elderly Insulate Britain Protesters in London
09:34 GMTHindu Activists Vandalise Mosque as Protests in Northeastern India Turn Violent - Video
09:23 GMTSonia Gandhi Bashes Indian Gov't for Vaccinating 'Less Than a Third of Adult Population' in 9 Months
08:55 GMTLavrov: Terrorists Disguised as Afghan Refugees Trying to Get Into Neighbouring Countries
08:22 GMTWaqar Younis Ignites Indians After Claiming He Loves Namaz Recited 'in Front of Hindus' at T20 Match
08:18 GMTErdogan Seeks to Discuss US-Turkey Row Over F-35 Jets With Biden at Glasgow Talks
08:12 GMTTerror Group Threatens Those Reporting Students 'Celebrating' Pakistan's T20 Win vs India
07:53 GMTChina Urges US to Respect Commitments on Taiwan in Response to Blinken's UN Statements
07:47 GMTFrance and Bayern Munich Player Lucas Hernandez Spared Jail Term
07:42 GMTUS Regulator Bans China Telecom America Over 'Significant' National Security Risks
07:38 GMTGerman Regulator to Consider Nord Stream 2 Network Independence
07:15 GMTCan Ole Gunnar Solskjaer Save His Manchester United Job?
07:06 GMTPrince Andrew's Lawyer Asks to Keep Epstein's Settlement With Virginia Giuffre Sealed
06:47 GMTDanish Health Minister Demands More Vaccinations to Avoid New Lockdown
06:42 GMTEx-Lehman Brothers Exec Predicts Three More Years of Inflation, Tech Stocks to 'Get Crushed'