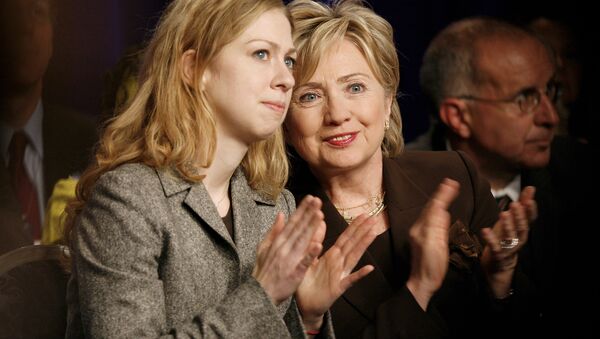 First Democrats blamed nefarious Russian spies and hacking. On Wednesday, a new thread was added to the narrative: Clinton blamed the Democrats’ data operations for her loss, despite receiving one of most sophisticated voter tracking databases in the history of politics, according to political strategists.

​Speaking at the 2017 Code Conference on Wednesday, the former candidate described the party’s data tactics as “poor,” "nonexistent" and "wrong." How "nonexistent" data could also be "wrong" is a bit confusing. Either way, what she said was false, campaign staffers argued.

​"Private mode be damned, this is too important," former Director of Data Science Andrew Therriault began in a tweet responding to Clinton’s slur. “I’m not willing to let my people be thrown under the bus without a fight.”

The “irony of her bashing our data: *our* models never had” Michigan, Wisconsin and Pennsylvania “looking even close to safe … her team thought they knew better,” he said.

​Therriault later deleted the tweets, including one in which he said it would have been difficult to raise as much cash as Clinton did without using the DNC as a “laundering vehicle.”

Clinton sought to mirror the practices of former US President Barack Obama’s two successful campaigns, which relied on precise targeting and outreach in swing states like Ohio, “like Obama 3.0, you know.”

​In her comments Wednesday, Clinton described the travails she endured as a candidate. “I set up my campaign and we have our own data operation … I inherit nothing from the Democratic Party. “

When asked what she meant by nothing, she elaborated, “it was bankrupt … its data was mediocre to poor, nonexistent, wrong. I had to inject money into it.”

At one juncture Clinton said, “I take responsibility for every decision I made, but that’s not why I lost.”

000000
Popular comments
Clinton wasn't even campaigning at first. She thought the media would win it for her. Trump's team said his polling was on target. Even Michael Moore said there was some reason why Trump kept working certain areas. Clinton never even bothered to go "blue" states. Clinton's campaign was a DISASTER. I think that truth is finally being exposed. Now, we need to prosecute her and many other Democrats for their crimes
stop the NATO wars
2 June 2017, 01:16 GMT3
000000
OOOOOOOOOH!!! Circus fun for the whole family. Special gladiatorial event with the former High Priestess of Arkancide versus Demonrat Stats. Free Bread.
Goldilocks67
2 June 2017, 02:21 GMT1
000000
Newsfeed
0
New firstOld first
loader
LIVE
Заголовок открываемого материала
Access to the chat has been blocked for violating the rules . You will be able to participate again through:∞. If you do not agree with the blocking, please use the feedback form
The discussion is closed. You can participate in the discussion within 24 hours after the publication of the article.
To participate in the discussion
log in or register
loader
Chats
Заголовок открываемого материала
Worldwide
InternationalEnglishEnglishMundoEspañolSpanish
Europe
DeutschlandDeutschGermanFranceFrançaisFrenchΕλλάδαΕλληνικάGreekItaliaItalianoItalianČeská republikaČeštinaCzechPolskaPolskiPolishСрбиjаСрпскиSerbianLatvijaLatviešuLatvianLietuvaLietuviųLithuanianMoldovaMoldoveneascăMoldavianБеларусьБеларускiBelarusian
Transcaucasia
ԱրմենիաՀայերենArmenianАҧсныАҧсышәалаAbkhazХуссар ИрыстонИронауОssetianსაქართველოქართულიGeorgianAzərbaycanАzərbaycancaAzerbaijani
Middle East
Sputnik عربيArabicArabicTürkiyeTürkçeTurkishSputnik ایرانPersianPersianSputnik افغانستانDariDari
Central Asia
ҚазақстанҚазақ тіліKazakhКыргызстанКыргызчаKyrgyzOʻzbekistonЎзбекчаUzbekТоҷикистонТоҷикӣTajik
East & Southeast Asia
Việt NamTiếng ViệtVietnamese日本日本語Japanese中国中文Chinese
South America
BrasilPortuguêsPortuguese
NewsfeedBreaking
15:01 GMTFBI Investigates Whether Long Island Blast Could be Linked to Terrorism
15:00 GMTRussian Startup Offers $200,000 for Right to Use Applicant's Face on Its Robot 'Forever'
14:59 GMTUK Spy Chief Urges Intel Services to 'Tap Into Global Tech' to Address 'Changing Nature of Threats'
14:52 GMTAlexander Lukashenko Says Poland-Belarus Refugee Crisis May be Resolved by Year-End
14:34 GMTSudan Denies Reports of Resumed Clashes at Border With Ethiopia
14:29 GMTFrance Needs Numerous Nuclear Reactors to Completely Re-Industrialize, Economy Minister Says
14:24 GMTIraqi Political Groups Reportedly Seek to Forge Bloc in Push to Drive US Forces From Country
14:22 GMTStoltenberg & Latvian Foreign Minister Deliver Remarks at NATO Foreign Ministers Meeting in Riga
14:20 GMTUS Revokes Terrorist Designation for Colombia's FARC
14:03 GMTWEF Says Will Continue to Prepare for Annual Meeting in Davos Despite Omicron Concerns
13:59 GMTIndian Opposition Demands That Bihar Chief Resign After Liquor Bottles Are Found in State Assembly
13:49 GMTTrump, 6 January Panel to Face Off in Federal Appeals Court Over White House Docs
13:37 GMTMinsk Ready to Deploy Russian Nuclear Weapons if NATO Systems Appear in Poland, Lukashenko Says
13:00 GMTPutin Undecided if He Will Run for President Again
12:49 GMTSudanese Police Use Tear Gas Against Demonstrators in Country's Capital - Photo, Video
12:39 GMTPETA Launches Fake Store Touting 'Human Leather Goods,' Slams Urban Outfitters
12:33 GMTResidents of Indian City Perform 'Pothole Worship' in Sign of Protest - Video
12:09 GMTUK Competition Regulator Orders Facebook to Sell GIF Sharing Platform Giphy
12:08 GMTCristiano Ronaldo Calls Ballon d'Or Chief ‘Liar’ For Claiming His ‘Ambition’ is to Outrival Messi
12:06 GMTRussia Will Soon Have New Hypersonic Missile With Maximum Speed of Mach 9, Putin Says