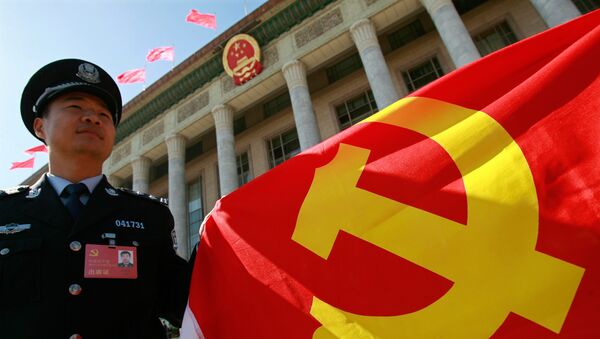 © AFP 2023 / TEH ENG KOON
Subscribe
International
India
Africa
Close ties between Russia and China during the Communist era may become a challenge as the two countries are looking to strengthen their relations under completely different modern-day conditions.

China Eyes Russia's Northern Sea Route as Safest Maritime Path to Europe
MOSCOW (Sputnik), Tommy Yang — Close ties between Russia and China during the Communist era may become a challenge as the two countries are looking to strengthen their relations under completely different modern-day conditions.

CULTURAL EXCHANGE STAYED IN THE 1960S

The Communist brotherhood between the Soviet Union and China was mentioned repeatedly at the recent third international conference called Russia and China: Taking on a New Quality of Bilateral Relations, a two-day event on modern Russia-China relations that concluded in Moscow on Tuesday.

Song Jingwu, the vice president of the Chinese People's Association for Friendship with Foreign Countries (CPAFFC) and the deputy chairman of the China-Russia Friendship Association, stressed the tight-knit relations Soviet-Chinese in his opening speech at the conference.

"In the early days after the founding of People’s Republic of China, the cultural exchange between USSR and China were very rich and extensive. Russian language classes were offered in Chinese elementary and middle schools. Russian films, plays and ballet had a strong impact on the development of arts in China," Song said.

The popularity of Russian culture, including music, films and literature reached its peak in the 1960s in China. Even Chinese films produced during that time carried a unique "Communist" accent, which made it sound almost identical to Russian films. A large number of Russian songs were translated into Chinese language and became household favorites.

Those Chinese born during that era embraced the Russian culture immensely. Former Chinese President Hu Jintao, born in 1942, was seen performing the Russian song "Moscow Nights" in Chinese language at a government banquet in 2006. Chinese First Lady Peng Liyuan, born in 1962, who used to be a famous folk singer and released a number of albums, performed the song "Oh the Snowball Bush Blooms" in Russian language on various occasions.

World
China's Top Infrastructure Company CGGC Views Russia as Strategic Partner
Sergey Shakhray, vice dean of Lomonosov Moscow State University (MSU), opened his presentation at the conference with a slideshow of academic exchange between the Soviet Union and China back in the 1950s. He said over 5000 Chinese students were sent to study at his university in 1956. And when he presented a picture of late Chinese President Mao Zedong’s visit to his university in 1957, many participants at the conference took out their smartphones and started snapping pictures of the scene. According to Shakhray, his university even opened a Chinese kitchen to accommodate the Chinese students’ cravings for their native cuisine.

But today, many Chinese consider the cultural exchange between the Soviet Union and China to be one-sided.

"It was mostly a one-way exchange, in which China was learning everything from Russia," Song said.

Younger people in China, unlike their parents, are no longer attached to Russian culture. Instead, they became loyal fans of Western artists and sports stars. For example, retired NBA star Kobe Bryant has over 5 million followers on Chinese social media website Weibo.com. US pop singers such as Beyonce and Katy Perry have 2.3 million and 1.2 million followers, respectively, in China.

In comparison, popular Russian artists such as Timati, Basta or Loboda don’t even have a presence on Chinese social media. The most popular Russian artist on Weibo.com is Vitas, who is well known in China for his high-pitched voice. But he only has about 250,000 followers in China and is almost unknown to the Russian audience. When Russian singer Egor Kreed tried to use Chinese language on the cover of his new album called "What They Know," the Chinese words contained simple grammar mistakes.

The number of Chinese students studying overseas is also a good indicator of overall interest in the destination country.

World
China Ready to Cooperate With Russia on N Sea Route - Foreign Minister
According to figures from Russia’s Ministry of Education and Science, about 20,000 Chinese students are enrolled at Russian schools and universities. In comparison, the number of Chinese students studying in the United States reached a staggering 328,547 in 2016, accounting for about 31.5 percent of all foreign students in the country, according to data from the Institute of International Education.

Vladimir Gusev, the director of the State Russian Museum, shared his personal experience of this change with the audience at the conference. According to Gusev, while he could sing Russian songs together with older Chinese scholars, he found it very difficult to find an excellent younger Chinese interpreter of Russian language.

Chinese scholars also expressed concern over the lack of mutual understanding and interests in the modern cultures of both nations.

"When we talk about Sinology, I hope it can be evolved into the New Sinology. In addition to traditional Chinese culture, it also has to include interpretations of modern Chinese culture. Of course, our research into Russian culture should also not be restricted to traditional Russian literature. We also need to expand our research into modern economic, political and social topics in Russia," Zhu Guanglei, vice dean of Nankai University in Tianjin, China, said.

Wu Fengshi, associate professor of Nanyang Technological University in Singapore, offered a popular phrase among Chinese scholars to describe China’s relations with the United States and with Russia.

HOW TO DEAL WITH AN ASSERTIVE CHINA

Asia
Domestic or Imported? New Chinese Aircraft Carrier Has Soviet Roots
Contrary to the previous bilateral relations between the Soviet Union and China when the Russian side dominated, China is also seeking a more assertive position in its relationship with Russia.

At Monday’s discussion session on Russia and China’s interest in the Arctic region, Guo Peiqing, executive director of the Institute of Polar Law and Policy at the Ocean University of China, voiced a strong Chinese position on the issue.

"I think the world has entered a new era. Integration of Asia and Europe is also entering a new age. The Northern Sea Route can become an important supplement to China’s OBOR [One Belt, One Road] initiative," Guo said.

Guo went on to stress that China’s state-owned-enterprise Poly Group Corporation will build the Belkomur railway, a project that will link the mining and industrial areas in the south Urals to the port of Arkhangelsk via Syktyvkar in the Komi Republic.

Commenting on potential economic cooperation in Russia’s Far East regions, Li Yongquan, director of the Institute of Russian, East European and Central Asian Studies at the Chinese Academy of Social Sciences (CASS), suggested that the Russian port city of Vladivostok could be used for China to move products domestically from its northeast regions to coastal Chinese cities in the southeast by sea.

Historically, Vladivostok has been the sore spot for many Chinese for over a century, after Chinese emperors of the Qing dynasty gave up the territory through the Beijing Treaty following the end of the Second Opium War in 1860.

When Chinese President Xi Jinping talked about his initiative of "the great revival of the Chinese nation," he often cited China’s defeat in the two Opium Wars as an important lesson. The period following the Opium Wars is often referred to in China as "the century of humiliation."

Unsurprisingly, when Xin Zhongyi, the vice president of China Gezhouba Group Corporation (CGGC) mentioned the city of Vladivostok at the conference, he used "Hai Shen Wai", the Chinese name for the city during the Qing Dynasty, instead of the formal phonetic translation of the name into Chinese.

Xin may not have used the old Chinese name of Vladivostok intentionally, but for many Chinese like Xin, it is not easy to forget about history.