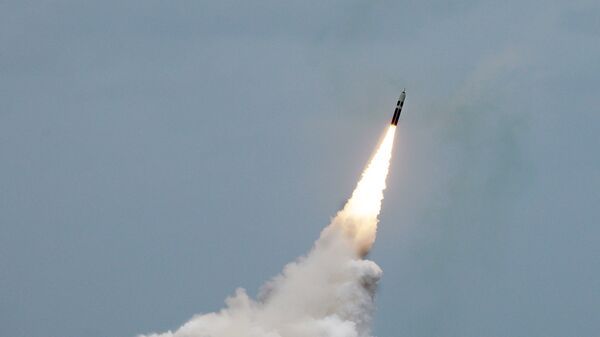 The United States still lacks any prospect of a reliable missile defense system against incoming ballistic threats armed with nuclear warheads despite outcomes reported on a test interception over the Pacific Ocean, analysts told Sputnik.

WASHINGTON (Sputnik) — On Tuesday, the US Air Force successfully intercepted an intercontinental ballistic missile target over the Pacific Ocean during a test of the Ground-based Midcourse Defense (GMD) system, the Missile Defense Agency (MDA) said in a press release. US officials, however, will continue to evaluate the GMD’s performance based upon telemetry and other data acquired during the test, the release added.

"We have been told repeatedly since the 1950s that a successful missile defense is just around the corner," Professor of neuroscience and political commentator John Walsh told Sputnik. "And it was true each time, because each time Raytheon and others made a bundle from it."

However, that was the only kind of "success" that was ever achieved, Walsh recalled.

"Since no ‘missile defense’ will ever be perfect, how many cities is a president willing to give up if he starts a nuclear war?" he asked.

Even a relatively small and marginally effective nuclear armed missile was too risky to attack in any attempt at any preemptive strike, Walsh observed.

Pentagon Speeds Up Work on Multi-Warhead Interceptor
"But even if our presidents sensibly restrain themselves, something that I doubt… there can be accidents and our hubris may yet wipe us out," he cautioned.

"Ever since Ballistic Missile Defense (BMD) first was thought about seriously in the 1960s, it could not counter one cardinal truth. No one will ever launch nuclear weapons in the uncertain belief/hope that they have come up with a way to defend themselves 100 percent against retaliation," Brenner claimed.

However, as a corollary, no one would cavalierly do something that could lead to nuclear exchanges, Brenner acknowledged.

The US armed forces announced that its interceptor rocket launched from Vandenberg Air Force Base in California struck the warhead which was fired from a US site in the middle of the Pacific Ocean.

The latest test comes at a time of increasing tension between the United States and North Korea, which US defense officials say is making rapid progress toward developing an intercontinental ballistic missile.