Gimme a Buzz, Man! Trump Urges Leaders to Call Directly on His Cellphone 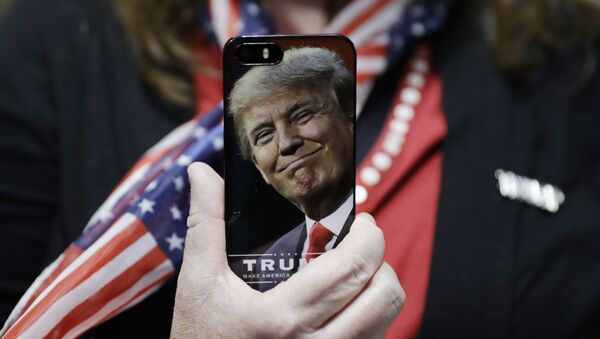 United States President Donald Trump has been giving his mobile phone number to world leaders, urging them to call him directly, The Associated Press reported.

The Mystery of 'Covfefe': Trump Confounds the World With Enigmatic Tweet
Such an "unusual invitation breaks diplomatic protocol and is raising concerns about the security and secrecy of the US commander in chief’s communications," according to the report.

Trump has already urged the leaders of Canada and Mexico to call him on his cellphone, former and current US officials told AP. According to the sources, only Canadian Prime Minister Justin Trudeau has taken advantage of the offer.

In the diplomatic arena, a world leader communicating with other leaders via unsecured mobile phones is a breach of protocol. Making calls via unofficial communications channels makes Trump’s conversations extremely vulnerable to eavesdropping, including by foreign intelligence, experts say.

"If you are speaking on an open line, then it’s an open line, meaning those who have the ability to monitor those conversations are doing so. … If someone is trying to spy on you, then everything you’re saying, you have to presume that others are listening to it," Derek Chollet, a former Pentagon adviser and National Security Council official, told AP.

One Ball to Rule Them All! Trump's Arabian 'Orb of Power' Mystifies Social Media
Taking into account the wiretapping scandals and allegations of disclosing confidential information, the main question is whether Trump really takes care about the secrecy of his communications.

Another breach of protocol by an impulsive state leader has sparked numerous reactions from social media users.

For example, some users expressed bewilderment over the report, including drawing parallels between the situation and Trump’s allegations over Hillary Clinton using private email servers.

Trump does not realize how easily monitored a cell phone is. I find that disturbing. At this point he has no excuse not to know.

worried about the security of Hillary's emails, Trump giving out his unsecured easily tapped cell phone # instead of the official secure one https://t.co/XnyYVSKi7h

The security concerns about Trump's cell phone are real but the diplomatic concerns seem a little bogus to me.

Trump's worried about his landlines being tapped, so he wants to be called on his cell phone for security reasons.

Others just reacted with ironical remarks and jokes, not without mentioning the US president’s alleged ties with Russia.

Why is Trump giving world leaders his cell number when he can just summon their astral presences with the Orb?

My theory: Covfefe is a third-world dictator that Trump gave his cell phone number to.

In the era of smartphones, email and video chats, the traditional phone remains one of the key instruments in the US president’s diplomatic toolbox. Presidents generally hold conversations, using one of the several secure phone lines, including in the Oval House or in the presidential limousine.

'War Room': Trump Aims to Set Up Special Group to Counter Information Leaks
Usually, telephone calls between the US president and a foreign leader requires a lot of preplanning work. There is a whole formal procedure to organize such a conversation.

For example, Trump wants to talk to French leader Emmanuel Macron. He cannot simply call him on a mobile phone or send a couple of text messages.

In such cases, a special protocol is engaged where the staffs of both administrations, as well as other senior officials, need to lay the groundwork. If relations between the leaders are not that close an ambassador should make a formal request on behalf of the country’s leader. The sides discuss the agenda and reasons for the conversation. If agreed, the talks then need to be added to the busy schedule.

Moreover, the preparatory work includes providing a dossier on the leader the president wants to call. The document is prepared by the National Security Council (NSC). The file includes an intelligence portrait of the person, including information about their personality, health and loved ones.

Interestingly, since Watergate, phone calls by the US president have not been recorded, according to some sources. But up to three national security staffers and a presidential translator are usually listening to the audio and typing. Those records are preserved and archived.