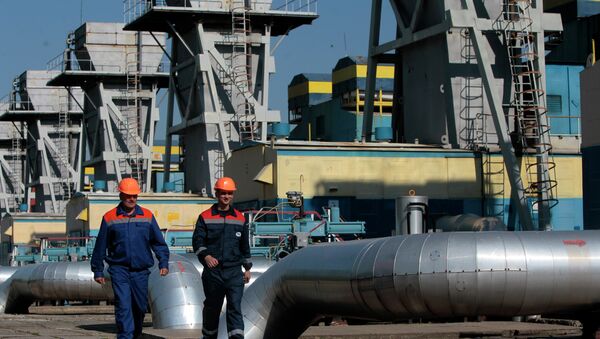 The Arbitration Institute of the Stockholm Chamber of Commerce on Wednesday lifted the ban on re-export of Russian natural gas by Ukraine and ruled to review the price formula stipulated by gas deliveries contract between Russia's Gazprom and Ukraine's Naftogaz, the Ukrainian Foreign Ministry said.

KIEV (Sputnik) — Gazprom has been litigating with Naftogaz in the Stockholm arbitration court over natural gas delivery from Russia to Ukraine and gas transit through Ukraine since June 2014.

"Their position [Stockholm Arbitration] on the key issues was the following: the condition "take or pay" (the lion's share of Gazprom's financial claims) was removed completely, the ban on re-export was lifted completely, the price formula was revised starting from 2014 — the European hub," Deputy Foreign Minister for the European Integration Olena Zerkal wrote in her Facebook blog.

Ukraine is a key country for transit of Russian gas to Europe, however, the two states have been engaged in gas disputes for years.

World
Why Russia's Gazprom Plans to Slash Volumes of Its Gas Transit Through Ukraine
In June 2014, Gazprom switched Ukraine to a prepayment system for gas supplies, citing the country’s massive gas debt. The so-called "take or pay" rule obliges Ukraine to pay for the volume of gas specified in the contract regardless of the real volume of purchases. Naftogaz immediately appealed to the Arbitration Court in Stockholm to retroactively revise its 2009-2019 gas transit contract with Russia.