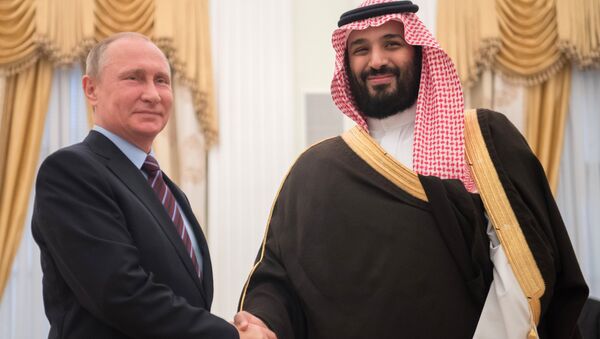 Ahead of the visit, the Russian president said that Moscow-Riyadh ties are showing considerable progress. In turn, bin Salman said that his visit to Moscow would be a major step in strengthening Russia-Saudi relations because there are a lot of common points.

Russian, Saudi Investment Funds Eye Over 25 Projects in Russian Economy
"As for differences between our countries, there is a clear mechanism to resolve them. We’re making fast progress towards our desired goals," he noted.

President Putin also reiterated his invitation for Saudi King Salman bin Abdulaziz to come to Russia "on the first visit in the history of our relations."

Maksim Suchkov, an expert at the Russian International Affairs Council think-tank, noted at the current state of relations between Saudi Arabia and Russia, the two national leaders are unlikely to pay visits to each other, since the United States remains the key ally of the kingdom.

"But the deputy prince is a powerful politician and, possibly, the next Saudi king. He has established good working relations with the Russian leadership and both sides use these communications channels in their own interests," he told RBK.

In addition to the issue of bilateral cooperation, Putin and bin Salman discussed ways to resolve the conflict in Syria.

"We have contacts on a political level, between our defense ministries. We cooperate on resolving difficult situation, including in Syria," the Russian president said.

Saudi Arabia Calls for Political Settlement of Syrian Conflict
In turn, the deputy crown prince underscored that there are no collision points between Riyadh and Moscow in the international arena and Saudi Arabia hopes to carry out its foreign policy together with Russia in the interests of both countries.

Since the beginning of the Syrian conflict, Riyadh has pushed for ousting Syrian President Bashar al-Assad and supported the so-called moderate opposition. Riyadh is also part of a US-led international coalition fighting Daesh in Syria and Iraq. In contrast, Russia supports the Syrian government and is a guarantor of peace in Syria, together with Iran and Turkey.

"Syria was the most important issue on the agenda because Moscow is betting on cooperation with Tehran and Ankara in the Syrian settlement. Saudi Arabia supports Syrian opposition groups. In order to resolve the crisis, it is important to reach compromises and work out a solution that would serve the interests of each of the parties involved," Vladimir Fitin, a senior analyst at the Russian Institute for Strategic Studies, told Sputnik.

He pointed out that both Riyadh and Washington were skeptical about the establishment of de-escalation zones in Syria, which were brokered by Russia, Iran and Turkey.

Trump's Deal With Riyadh Sends 'Encouraging' Signal to Radical Islamists
"Currently, the main goal is to try to bring the Saudis to cooperation and find some solutions," the expert said.

According to him, Riyadh continues to play a major role in the Syrian crisis, including providing militant groups with money and weapons.

"Their initial goal was to topple Bashar al-Assad and to install a new government. They failed to do that and now Saudi Arabia is doing its best to provide maximum support to certain forces in different parts of Syria. If Syria is divided Riyadh will try to take control over a certain part of the country," Fitin said.

The issue of relations with Iran may also have been on the agenda because Iran is Russia’s ally and at the same time an ideological, political and military rival of Saudi Arabia, according to Vladimir Sazhin, a senior research fellow at the Institute for Oriental Studies of the Russian Academy of Sciences.

Trump called to boost international isolation of Tehran and accused the Iranian government of sponsoring terrorism, fueling conflicts in the Middle East, supporting Assad and hostility towards Israel.

"From Lebanon to Iraq and Yemen, Iran funds, arms and trains terrorists, militias and other extremist groups that spread destruction and chaos across the region. … For decades Iran has fueled the fires of sectarian conflict and terror," Trump said at a summit in Riyadh.

Boris Dolgov, a senior expert at the Institute for Oriental Studies of the Russian Academy of Sciences, said that Riyadh has repeatedly tried to use its financial and economic capabilities to put pressure on Moscow, including over the Syrian crisis and other conflicts.

"Saudi Arabia expects that such economically promising deals should prompt Russia to make political concessions in a way that it would serve Riyadh’s interests. This is how the Saudis make politics. That’s a well-known fact," Dolgov told Sputnik.

Saudi Arabia Interested in Wide Range of Advanced Russian Weapons
The expert suggested that Saudi Arabia is likely to use this approach in its relations with Russia.

"They will offer economically advantageous deals, in exchange for certain moves that would serve their political interests. Taking into account the differences between Riyadh and Moscow on Syria, this strategy may work out in terms of economy, but it raises certain concerns in political terms," the expert said.

Thus, Dolgov warned that Russia should carefully examine each of its potential deals with the Gulf kingdom.

"All potential contracts need to be scrupulously evaluated. But I’ll say it again that Saudi Arabia will continue its policy, including financially and economically tempting deals in exchange for political gains and expansion of its influence," the expert concluded.