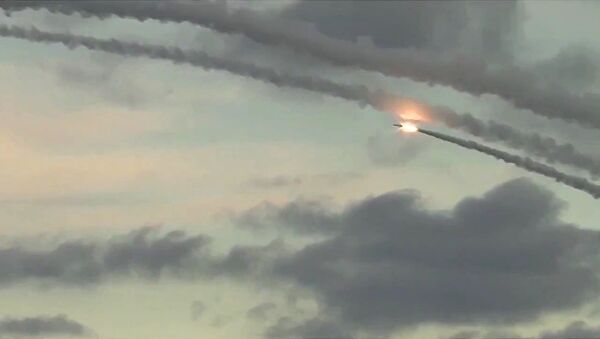 The Russian Navy hit a number of Daesh targets at the area of Syria's Palmyra with Kalibr cruise missiles, the Russian Defense Ministry said Wednesday.

"The Russian Navy's Admiral Essen frigate and Krasnodar submarine performed a launch of four Kalibr cruise missiles from the eastern Mediterranean against the targets of the IS [Daesh] terrorist groups in the area of Palmyra," the ministry said. "All targets have been struck."

The Russian Defense Ministry released a video footage demonstrating how the strikes against the Daesh terror group were carried out.

The video posted on the Russian social network VK (VKontakte) shows the use of missiles by a battleship as well as missile launches from a submarine. The footage also demonstrates the destruction of several targets by the Russian missiles.

The US, Turkish and Israeli militaries have been warned in advance, the ministry said Wednesday.

"The US, Turkish and Israeli commands were informed in a timely manner of the cruise missile launches through the operational channels of interaction," the ministry said in a statement.