Funding Corruption: Why the World Is 'Better Off' Without Western Aid and NGOs 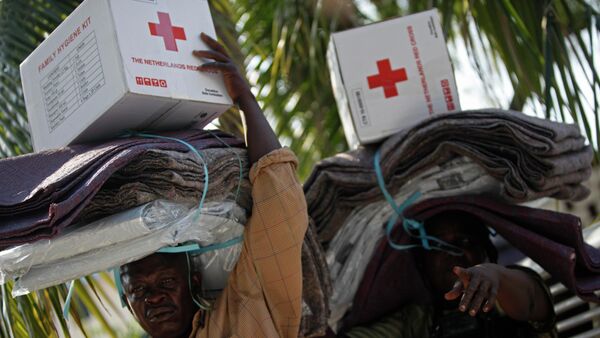 © AP Photo / Esteban Felix
Subscribe
Around the world, Western aid is failing to fulfil its stated objectives. Nowhere is this more flagrant than Haiti, where despite billions flowing in to the ravaged country, little progress has been made since the 2010 earthquake. A former UN development expert has suggested the country – and others – may well fare better without.

In the immediate aftermath of the quake, US$5 billion was donated by the international community — but a large proportion never even got close to helping affected citizens and infrastructure in the country, as it was guzzled by covered operational costs — at least 10 percent was taken by the Haitian government as "budgetary support" and the rest absorbed by international humanitarian groups for uncertain purposes. In the end, not even one percent was taken by local NGOs.

Summing up the state of play in Haiti seven years on, Joel Boutroue, Deputy Special Representative of the Secretary General of the United Nations for the UN Stabilization Mission in Haiti between 2006 to 2009, was unambiguous — the country would be "better off" without aid. Noting Haiti has been described as an "NGO republic," Boutroue added that NGOs operating in the country financed by international state donors pay very little heed to the Haitian state itself, marginalizing the government and weakening its power.

5 Years After Haiti's Earthquake, Where Did The $13.5 Billion Go? pic.twitter.com/wwB7qFO6tO

Often, he said, this is because donors' priorities are not aligned with recipient countries' — this effect was highlighted in the World Bank's 2017 report on governance and law, which highlighted how donors, often out of cynicism, tended to pursue short-term interests. Moreover, corrupt or inept governments are often happy to sit back and skim cash from donations, without undertaking vital reforms — the report also highlighted countries that receive the most aid made the least effort to conduct necessary improvements.

​The ineffectiveness of Western aid in achieving positive, lasting change is nowhere writ larger than Sub-Saharan Africa, which receives US$134 billion each year in loans, foreign investment and development aid from Western governments, yet remains one of the poorest, most corrupt regions on Earth. The answer behind Western aid's seeming futility may lie in its motivations — for often, despite its humanitarian label, aid has an ulterior purpose, that often serves corporate or state interests.

​Many within the charity sector are wise to the political and commercial dimensions of Western aid — John Hilary, Executive Director of War on Want, produced a study documenting how the International Monetary Fund opened up the Ghanaian poultry market to international exploitation — and subsequent collapse. This is but one example — aid has been used to exert control and influence by governments and corporations alike perhaps as long as it has existed.

NGOs have also demonstrably been covert tools of regime change, under the aegis of "democracy promotion." While NGOs, many of which are funded by shadowy billionaire "philanthropist" George Soros, have sought to subvert regimes in every corner of the world, since the fall of the Soviet Union much of this focus has been planted firmly in and around the Russian Federation. In 2005 for instance, the Soros Foundation launched its "Wider Europe" program, under which Belarus, Georgia, Moldova and Ukraine were targeted as future "partners" to the European Union, with the launch of facilitative educational, legal and political initiatives.

From 2014 (shortly after Yanukovych was ousted): George Soros on setting up groups in the Ukraine pic.twitter.com/Ryoq7xzPt3

​In August 2016, the release by DC Leaks of almost 3,000 files from groups run by Soros exposed his intimate involvement in the 2014 coup that overthrew the democratically elected government of Viktor Yanukovych, manipulation of public opinion Europe in order to legitimize the illegal act.

"The emergence of a New Ukraine carries with it the opportunity to reinvigorate the European project. However, this is complicated by the reluctance of some EU actors to accept the revolution as democratic and the Ukrainian government as legitimate. These actors will be difficult to influence. For other groups and individuals, on the political left and across various social movements, one can detect confusion regarding the state of affairs in Ukraine," a 2015 internal document published by the Open Society Initiative for Europe said.

Importing Democracy: US Breeds Activism in Belarus
In order to tackle this "issue" Soros' organization implemented a series of initiatives aimed at shaping Western opinion regarding Ukrainian affairs. Its stated objectives were "[stimulating] debate and doubt in movements, parties and audiences" in Europe where a negative perception of the "transformation" of Ukraine was "very preponderant"; discredit the idea "the independence and integrity of Ukraine is an ideological cause of the Right"; influencing the way information about Ukraine is heard and perceived in Europe "especially among the group of doubters."

​Nonetheless, governments the world over are increasingly aware of the mephitic role played by NGOs. In March, it was revealed the US and European Union have earmarked tens of millions to be sent to NGOs in Belarus, including USAID. In response, President Alexander Lukashenko targeted Washington and Berlin in a vicious speech, stating the pair were attempting to "destroy" the country, and there would be "no Maidan" in Belarus, referencing the 2014 Ukrainian coup d'etat. Egypt and Hungary have also banned many foreign NGOs from operating within their borders. Minsk is evidently not alone in not wishing for a rerun of such events in their own country.

sapper
31 May 2017, 20:49 GMT2
000000
All this organisations are Cia and Fbi, stupid people who gives 1 cent to any organisations, they play with the hearts of people on Tv with big spots and stupid people pay, why the Presidents and ministers doesn't give money when they steal billions? Why should i support anybody with the money i earned with my sweat, i enjoy my own money and F...... who ever is behind me, i call that selfishness and i am proud of it.
mounir.assi
31 May 2017, 22:25 GMT1
000000
Newsfeed
0
New firstOld first
loader
LIVE
Заголовок открываемого материала
Access to the chat has been blocked for violating the rules . You will be able to participate again through:∞. If you do not agree with the blocking, please use the feedback form
The discussion is closed. You can participate in the discussion within 24 hours after the publication of the article.
To participate in the discussion
log in or register
loader
Chats
Заголовок открываемого материала
Worldwide
InternationalEnglishEnglishMundoEspañolSpanish
Europe
DeutschlandDeutschGermanFranceFrançaisFrenchΕλλάδαΕλληνικάGreekItaliaItalianoItalianČeská republikaČeštinaCzechPolskaPolskiPolishСрбиjаСрпскиSerbianLatvijaLatviešuLatvianLietuvaLietuviųLithuanianMoldovaMoldoveneascăMoldavianБеларусьБеларускiBelarusian
Transcaucasia
ԱրմենիաՀայերենArmenianАҧсныАҧсышәалаAbkhazХуссар ИрыстонИронауОssetianსაქართველოქართულიGeorgianAzərbaycanАzərbaycancaAzerbaijani
Middle East
Sputnik عربيArabicArabicTürkiyeTürkçeTurkishSputnik ایرانPersianPersianSputnik افغانستانDariDari
Central Asia
ҚазақстанҚазақ тіліKazakhКыргызстанКыргызчаKyrgyzOʻzbekistonЎзбекчаUzbekТоҷикистонТоҷикӣTajik
East & Southeast Asia
Việt NamTiếng ViệtVietnamese日本日本語Japanese中国中文Chinese
South America
BrasilPortuguêsPortuguese
NewsfeedBreaking
15:13 GMTBiden Can't Thwart Work of 6 January Committee, But It's in His Interests, US Media Claims
15:12 GMTIndia’s Top Probe Agency Reportedly Arrests Naval Officers in Kilo-Class Submarine Leak
15:04 GMTCanadian Prime Minister Trudeau Unveils New Cabinet
14:53 GMTSudanese Civil Aviation Authority Temporarily Suspends Flights to and From Khartoum
14:46 GMTEx-Pennsylvania Sec of State Selectively Informed Counties of Private 2020 Election Grants - Report
14:36 GMTNew Zealand's Prime Minister Announces New COVID-19 Vaccination Requirements for Workers
14:26 GMTQueen Elizabeth II Forced to Give Up Walking Her Dogs as Doctors Advise Her to Rest, Report Says
14:23 GMTThis Septic Isle… Sewage Hits Brexit Fans
14:22 GMTSouth Korea's Ex-President Roh Tae-woo Dies Aged 88
14:16 GMTIslamist Suspect Reportedly Detained in Spain Planned to Carry Out Terrorist Attack
14:04 GMTLa Cumbre Vieja Volcano Continues to Erupt on La Palma Island
13:42 GMTAmsterdam Museum Must Hand Scythian Gold Over to Kiev, Court Ruling Says
13:39 GMTNew York Governor Hochul Hires Law Firm to Help Investigate Claims of Harassment in State Gov't
13:29 GMTWatch Russian Marines Saving Civilian Ship From Pirates
13:18 GMTRoad-Blocking Insulate Britain Protesters Advise Drivers Against Using London Highway From Wednesday
13:14 GMTCristiano Ronaldo's Mysterious Gesturing Sparks Guessing Game on Social Media
12:39 GMTBollywood Actor-Host Maniesh Paul Talks Season 2 of 'India's Best Dancer', COVID Experience
12:17 GMTChina's New Border Law Mandates PLA to Build Dual Use Infrastructure on Its Borders, Expert Says
12:14 GMTChina's Lanzhou Locked Down Due to Coronavirus Outbreak
12:04 GMTLeningrad Region Gov. Invites Council of Europe to Discuss Readiness for Green Economy Transition