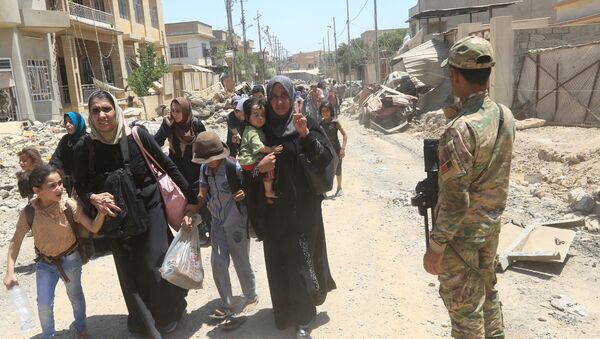 © REUTERS / Alaa Al-Marjani
Subscribe
The United Nations World Food Programme (WFP) is concerned about the humanitarian conditions inside western Mosul's old city, where as many as 180,000 people are reportedly hungry and living in miserable conditions, according to offcial statement.

Iraqi Forces 'Launch Multi-Front Attack Against Last Remnants' of Daesh in Mosul
MOSCOW (Sputnik) – The UN World Food Programme (WFP) on Tuesday expressed concern over the humanitarian situation in west Mosul, which is suffering from famine and poor living conditions amid the Iraqi offensive against the Islamic State (ISIL or Daesh, outlawed in Russia) terror group.

"The United Nations World Food Programme (WFP) is concerned about the humanitarian conditions inside western Mosul's old city, where as many as 180,000 people are reportedly hungry and living in miserable conditions," the WFP said in a statement.

The WFP expressed particular concern over the rising malnutrition rate seen among children recently displaced from western Mosul, which has doubled since January.

Like a Rat: Daesh Leader al-Baghdadi Flees Mosul as Terrorists are Liquidated
The statement noted that the WFP had begun to fight children’s malnutrition by providing specialized supplement for children aged between six months and five years.

Access to reliable data on the situation in western Mosul remains limited, the statement added.

Mosul served as the Daesh headquarters in Iraq since the group's invasion from Syria in 2014. On May 23, a source in the Iraqi Kirkuk province’s security services told Sputnik that the terror group had relocated its headquarters to the town of Hawija in the province.

On February 18, Iraqi Prime Minister Haider Abadi announced the start of operations to liberate Mosul. Iraqi and US-led coalition forces liberated the eastern part of the city in late January 2017, with fighting now ongoing over its western part and the old city.