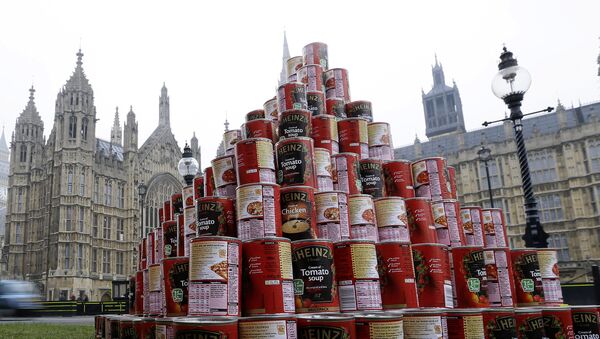 © AP Photo / Alastair Grant
Subscribe
Research has revealed at least 2,000 food banks operate in the UK, doling out emergency food packages ever week to individuals and families in hardship – just the latest study to highlight the ever-expanding growth of charitable food provisions in a country increasingly ravaged by austerity economics.

The findings, compiled by the Independent Food Aid Network (IFAN), supplement similar studies on UK food bank use compiled by the Trussell Trust, Britain's largest food bank network. The Trust reported April 25 it distributed a record 1.2 million food parcels to families and individuals — including 436,938 to children — in need in 2016-17, the ninth successive year in which demand rose.

​However, IFAN's study suggests Trussell's figures merely represent a partial picture of the scale of organized food bank provision, and the level of food bank use is in fact far greater than official data indicates. IFAN concludes there are at least 651 food banks operating independently of the Trussell network — a system that itself includes 419 banks and 1,373 distribution centers — ranging from tiny voluntary groups delivering a few food parcels each week, to bigger operations handing out thousands of parcels to hundreds of clients annually.

​In all, the UK is home to some 2,024 food banks. Even this total may underestimate the true size of the UK's food bank dependence, given it does not include informal food parcel distribution by social welfare charities, children's centers, churches, housing associations, hospitals and other organizations. Additionally, IFAN's mapping does not consider data on the volume of food aid provided by food banks — many do not record how much food they give out. Nonetheless, the volume of packages is likely to be vast in many areas — in Aberdeen alone, the city's two largest biggest food banks gave out 15,000 food parcels each in 2016-17.

​Professor Jon May, IFAN Chair, believes the figures emphasize the rapid rise of food banks since 2010, and poverty's shifting geography — these resources can now be found in almost every community, whether it be historically impoverished portions of East London, to wealthier rural regions such as the Cotswolds.

UK Hunger on the Rise, More People Than Ever Need Emergency Food
Sabine Goodwin, an IFAN researcher, spoke to over 50 food bank workers during the project. She added most had reported rising demand for food aid, with many staff feeling they were "firefighting" — focusing purely on finding a way to ensure more and more individuals do not go without food, rather than advocating for changes that would eradicate the need for food banks in the first place. If readers know of — or represent — an independent food bank or similar project not included in the survey, they should contact her.

Commenting, Rachel Loopstra, a lecturer in nutrition at King's College London, said recent national survey data indicated eight percent of adults endured not having enough money for food in 2016, although the figure was likely to be many times more than the number helped by food banks.

"We need ongoing national survey monitoring to understand the scale of food insecurity, who is at risk, and the implications for child and adult health and wellbeing," she said.

​In government, the Conservatives have consistently dismissed the issue of rising food bank dependency, with ministers rejecting the notion usage stems directly from financial pressure produced by their austerity program's welfare cuts and benefit reductions. In a much-maligned April 30 mainstream media interview, Prime Minister Theresa May struggled to answer why many nurses had been forced to resort to such resources to feed themselves, spluttering that there many "complex reasons" why people use them.

#BattleForNumber10 I hope Theresa May will do the one about there being many complex reasons why people use food banks. That cracks me up. pic.twitter.com/ItpI4h2vfh

​On May 29, Dominic Raab MP, a former Human Rights minister, said individuals were driven to use food banks not due to long-term poverty, but "episodic cash flow problems" — and claimed his conclusion was supported by the Trussell Trust.

I'll take you to a food bank if you want Dominic Raab. Horrendously ignorant & out of touch. Let's kick the born to rule lot out on June 8th https://t.co/tOZ97JiJeC

​However, his comments were condemned in many quarters, including by the Trust itself. In a statement, the organization said 27 percent of those referred to its food banks were struggling with delays to their benefits, while another 25 percent were referred because of low income — and the two issues were intimately connected.

"Our data shows the main reasons for food bank referral are delays and changes to benefits, and low income issues that included people who are struggling with low pay or insecure forms of employment. It is our experience that people living in poverty are more likely to experience a sudden short term crisis which would lead to them being referred for emergency food and support," said David McAuley, the Trust's Chief Executive.

In future, IFAN intends to map other forms of food aid in the UK, such as school holiday hunger projects, drop-in meal centers, social supermarkets, food clubs and soup kitchens.

While the government may be unclear on the cause of rising food bank dependency in the UK — perhaps genuinely, given its ongoing research into the question — there is a strong academic consensus that social policy changes best explain the trend.

A 2015 British Medical Journal paper found strong associations between rates of sanctioning, unemployment and cuts in central welfare spending and increased food bank usage — and a 2016 LSE study concluded delays in benefit payments and changes to benefits eligibility were the two major causes of food bank referral (accounting for 28 and 13.5 per cent of referrals, respectively), echoing the Trussell Trust's conclusions.