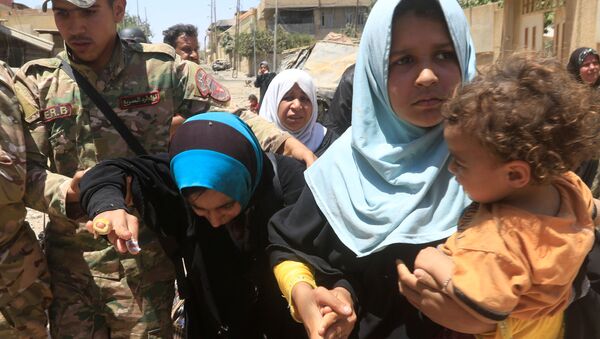 © REUTERS / Alaa Al-Marjani
Subscribe
The Chief of the Pentagon, General James Mattis, has said that the US will be "accelerating the temp" of the fight against Daesh and that because of this civilian deaths should be seen as a "fact of life."

Mattis told CBS' flagship show, Face the Nation, that while coalition — namely US — forces "do everything humanly possible" to avoid the killing of civilians, "civilians casualties are a fact of life in this sort of situation."

Mattis said that the war against Daesh had moved away from the battle of attrition in the form of continuing airstrikes toward what he called, "annihilation tactics" to stop those foreign fighters who join the self-styled caliphate from returning home.

General Mattis' comments come at a time when the US has been accused by the Syrian Observatory for Human Rights of killing at least 106 civilians, including 42 children, in an airstrike on the Daesh-held town of Al Mayadeen in Eastern Syria. The group also found that the last four-week period has been the deadliest in terms of fatalities of Syrian civilians on record, with an alleged total of 225, including 36 woman and 44 children, killed between the period of April 23 to May 23.

The strikes by the US and other coalition members are being carried out without the consent of the Syrian government of president Bashar al-Assad.

Since US president Donald Trump began his occupation of the White House in January, there has been a surge in civilian casualties as the US intensified its airstrike campaigns in both Syria and neighboring Iraq. Critics have vocalized their concerns that US foreign policy may be entering an era of the generals, in which military leaders, rather than elected politicians, are controlling the reins. This allegation, does not go uncorroborated. Mr. Mattis himself said in the Sunday, May 28 interview, that Mr. Trump has conceded greater executive authority over the military operations against Daesh that were given under the former Obama administration.

"We are going to squash the enemy's ability to give some indication that they're — that they have invulnerability, that they can exist, that they can send people off to, Istanbul, to Belgium, to Great Britain and kill people with impunity," Mr. Mattis emphatically asserted.

In the first four months of 2017, the US dropped 14,192 bombs on Iraq and Syria and since the US-led anti-Daesh coalition began in 2014, independent monitoring organizations say that upward of 3,681 civilians have been killed. Earlier in May, the US acknowledged that it had killed around 105 Iraq civilians in an airstrike on Mosul in March. However, this figure is disputed by the group AirWars, which said that the death toll was approximately 200.

Clinics near Mosul tell AP of at least 200 casualties in recent days, as civilians try to flee ISIL and fighting https://t.co/52L3GypKgS

General Mattis' candid statements are uncharacteristic of the US government, or certainly of administrations gone by. The US has long stood accused of using the language of humanitarian interventionism as a window dressing for its policies toward countries like Iraq and Libya. Moreover, it has often stood accused of obscuring and downplaying casualty figures. However, Mr. Mattis' comments seem to align with the rhetoric of an administration that has proven to be, if haphazardly, forthright with its comments.

Mattis concluded his television discussion by pointing the finger at Daesh for the massive civilian casualties in Mosul al-Jadidah in March, saying that it shows, "once again the callous disregard that is characterized by every operation they have run."

There are of course those who might say it is the US' disregard for the presence of civilians in strike-zones that has led the high number of casualties in Syria and Iraq.