Texas State Representatives Threaten to Shoot Each Other in Capitol Fracas 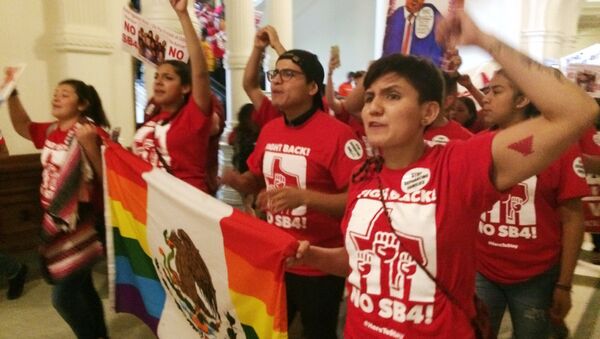 Texas state representatives have locked horns over a law signed earlier this month that critics say unfairly targets immigrants, and now both sides are threatening not only political resistance, but violence.

Following a fracas on the Texas Statehouse floor on Monday, Republican Texas state Rep. Matt Rinaldi said Monday he was prepared to "shoot" a Democratic fellow representative — "in self defense," of course.

Rinaldi wrote on Facebook that Democratic Rep. Alfonso Poncho Nevarez "threatened my life" and "physically assaulted me" and that Nevarez should expect Rinaldi to defend himself.

"Today, Representative Poncho Nevarez threatened my life on the House floor after I called [Immigration and Customs Enforcement] on several illegal immigrants who held signs in the gallery which said, ‘I am illegal and here to stay,'" he wrote Monday on Facebook. "Several Democrats encouraged the protesters to disobey law enforcement."

The scuffle apparently occurred when Rinaldi told his colleagues he'd called US Immigration and Customs Enforcement (ICE) on protesters at the Texas Capitol building. The Texas Observer reports that the protest on Monday was attended by more than 1,000 immigrants' rights supporters.

"He came up to us and said, ‘I'm glad I just called ICE to have all these people deported,'" state Rep. Cesar Blanco told the Texas Tribune.

State Rep. Ramon Romero described the incident in a statement on Twitter, saying that as he and other colleagues celebrated the voices being raised in protest, Rinaldi walked over to them and said "f*ck them, I called ICE."

"Our reactions were honest. Our reactions were of disgust," Romero wrote. There was then a debate about which immigrants actually "loved" the US, and as tempers grew heated, "members of [Rinaldi's] own party came to pull him away, making his accusation of being assaulted completely baseless."

"There was a subsequent exchange between my brother Poncho and Representative Rinaldi and there was a threat made from Rinaldi to put a bullet in one of my colleague's heads," Democratic Rep. Justin Rodriguez said after the incident, according to the Texas Observer.

"That kind of threatening language he needs to be called out and held accountable for."

Rinaldi contends that Nevarez told him he'd "get him" on his way to the car. Nevarez has denied anything of the sort.

The Texas Observer reports that ICE could not confirm whether it sent agents to the Capitol or not.

The law, S.B. 4, requires law enforcement bodies in cities and counties in Texas to work with federal immigration authorities if asked to detain people suspected of being undocumented immigrants. It was signed into law by Republican Texas Governor Greg Abbott earlier in May and will take effect in September.