Not Great: White Shark Jumps Into Boat, Lands on Fisherman 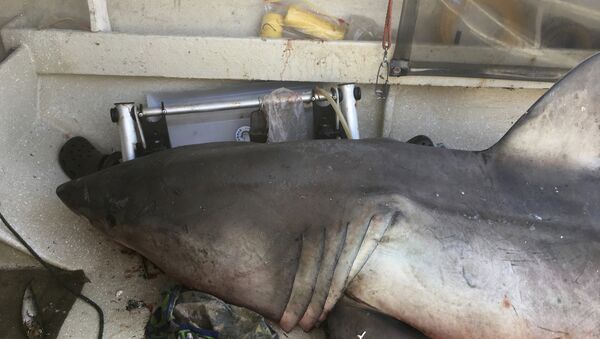 © AP Photo / Lance Fountain
Subscribe
Recreational fishing is a relaxing pastime – until a monster from the deep crosses the magical watery boundary and smashes your peaceful afternoon in a nightmare gesture of deadly destruction.

With teeth gnashing and body wildly thrashing, a great white shark — perhaps the deadliest of underwater animals — leapt from its watery domain directly into a small fishing boat in open ocean waters north of Sydney, Australia, on Saturday.

Meanwhile in Australia: Hungry Pilot Gets McDonald's Drive-Thru in His Chopper

Local fisherman Terry Selwood was thrown down as the monstrous nine-foot shark, after slashing his arm bloody with a pectoral fin, collapsed in a heap and heaved violently on the deck.

Selwood, in his little 15-foot boat, was clobbered by the shark as it leapt across the side, and he scrambled to the bow to avoid the furious monster.

"Flash Gordon wouldn't have caught me," he said, adding, "I didn't give it a chance to look me in the eyes. I wanted to get up and get on top […] because it was thrashing around madly," according to the Australian Broadcasting Corp.

The fishermen used a handheld radio he had luckily within reach to frantically call the Australian Coast Guar. He remained perched on the bow until help could arrive.

‘I'm injured, I've broken my arm, I've got lacerations and there's a shark in my boat," the hapless fisherman declared to the maritime rescue squad.

The Coast Guard soon arrived. Having experience with locals commonly bringing up a two or three-foot fish, landing it inside their boat, and being surprised by the still-living animal's often violent exertions, they were not prepared to see a creature so large inside such a small boat.

A "two- or three-feet [shark is] still ferocious. That's what I was expecting, but I was totally wrong," Coast Guard skipper Bill Bates, Selwood's rescuer, said.

Bates and his crew quickly transferred Selwood to the relative safety of the larger boat, and left the 440 pound shark alone on the deck of the little fishing craft.

"The shark was thrashing inside the boat, taking up the entire deck area — there was no way you'd put a foot in there," Bates said, cited by Australia's National Post.

Selwood, following a short stay at a hospital to bandage his arm and affirm that there was no fracture, is eager to return to the spot where he has fished for more than 50 years. But first he'll have to replace some necessary equipment and repair his boat.

"He was doing a mad dance around, he was thrashing everywhere," Selwood explained. "You can understand, he was a wild creature out of his comfort zone."