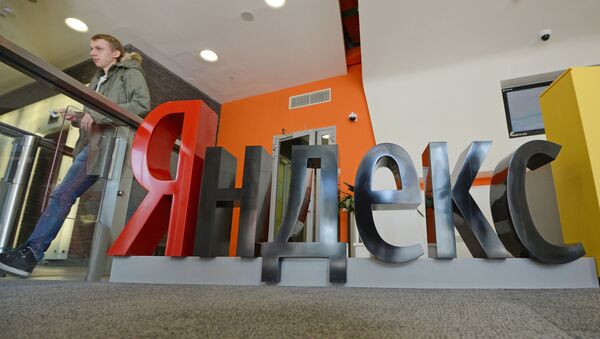 © Sputnik / Maksim Blinov
/
Go to the photo bank
Subscribe
According to reports, Russian IT company Yandex offices in the Ukrainian cities of Kiev and Odessa are being searched by the Security Service of Ukraine.

Kremlin Lacks Full Information on Searches in Yandex Offices in Ukraine
MOSCOW (Sputnik) – Russian IT company Yandex offices in the Ukrainian cities of Kiev and Odessa are being searched by the Security Service of Ukraine (SBU), the company said in a statement on Monday.

“Representatives of the Security Service of Ukraine are now in our offices in Kiev and Odessa. We have no information about the causes of today's actions by the SBU. Lawyers are already heading for our offices. In accordance with the legal procedures, we are ready to provide the [law enforcement] bodies with necessary information,” the statement said.

The SBU press service said that the search was conducted as part of investigations into a case on treason against the state.

"The SBU is, in fact, carrying out searches in the offices of the Russian company Yandex subsidiary in Kiev and Odessa. The investigatory activities are being carried out as part of the criminal proceedings opened under the Article 111 of the Ukrainian Criminal Code (treason against the state). The details will be [disclosed] later, follow the Security Service of Ukraine's website," SBU spokeswoman Olena Gitlyanska wrote on her Facebook page.

Earlier this month, Ukrainian President Petro Poroshenko approved the decision of the National Security and Defense Council (NSDC) to expand the list of sanctioned Russian individuals and legal entities. In particular, Ukraine imposed sanctions on a number of Russian media and popular social networks such as VKontakte and Odnoklassniki. Yandex is also targeted by the restrictive measures.

According to Chairman of the Board of the Ukrainian Internet Association (UIA) Alexander Fedyenko, Ukraine will need $1 billion and about two years to block the websites.

Kremlin spokesman Dmitry Peskov said that Moscow regarded Kiev's decision to expand sanctions against Russian individuals and legal entities as another manifestation of an unfriendly and short-sighted policy against Russia.