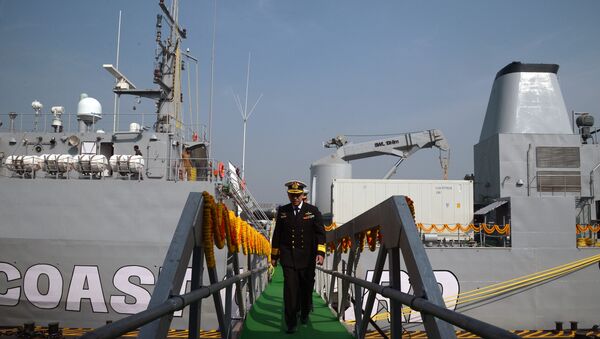 © AFP 2021 / DIBYANGSHU SARKAR
Subscribe
India has extended a US$500 million credit line to Mauritius and a maritime security pact to boost cooperation between the two countries along with signing agreements in the domain of education and marine science and technology.

New Delhi (Sputnik) — India's overtures to Mauritius comes two weeks after the country attended China's Belt and Road initiative in Beijing, and during the visit of Prime Minister of Mauritius Pravind Kumar Jugnauth over the weekend. Mauritius was represented by a minister only, unlike Pakistan, Sri Lanka, Myanmar and others who were represented by their top leaders at the Belt and Road Summit.

India Eyes Indian Ocean, Defense Minister Visits Island Nation of Mauritius
New Delhi has often described Mauritius as key to its Indian Ocean region security architecture and securing trade routes. Moreover, both countries share unique historical and cultural ties, especially with the island in the Indian Ocean having a large population of ethnic Indians who were taken there by British colonizers to work as indentured laborers.

In their joint statement on Saturday, Prime Minister Narendra Modi and his Mauritian counterpart reiterated these linkages and said the effective management of conventional and non-conventional threats in the Indian Ocean was a prerequisite for the exploitation of economic opportunities.

"The conclusion of the bilateral Maritime Security Agreement will strengthen our mutual cooperation and capacities. We have also agreed to further strengthen our wide-ranging cooperation in hydrography for a secure and peaceful maritime domain," Modi said.

PM @narendramodi: PM Jugnauth & I agree that it is our responsib'ty to ensure collective maritime security around our coasts & in our EEZs

PM: We agree that effective mngnt of conventional & non-conventional threats in Indian Ocean is essential to pursue economic opportunities pic.twitter.com/lwA4bZ4080

PM @narendramodi: The conclusion of the bilateral Maritime Security Agreement today, will strengthen our mutual cooperation and capacities.

​The line of credit agreement was signed between SBM Mauritius Infrastructure Development Co. Ltd and the Export-Import Bank of India.

On its part, Mauritius once again confirmed its support for a permanent seat for India at the United Nations Security Council. The two sides also vowed to further trade and investment.

"There is a large Indian diaspora in Mauritius which holds immense sway over policymaking and establishment within the country for strong ties with India. Mauritius has been quite open about it also, but let's not forget China too has heavily invested in the island, in fact, all of Africa. In today's world, it is too simplistic to assume foreign relations as a zero-sum game. Mauritius too is capable of managing multiple ties and with both India and China," Ajay Dubey, Professor, Centre for African Studies, at New Delhi-based Jawaharlal Nehru University, told Sputnik.