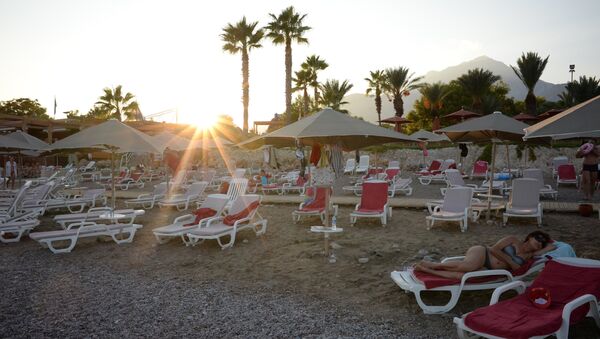 © Sputnik / Vladimir Vyatkin
/
Go to the mediabank
Subscribe
International
India
Africa
Russia's Consulate General in Antalya is verifying information about a bus accident with Russian tourists on the road connecting the cities of Cappadocia and Alanya in Turkey, according to Consul General Oleg Rogoza.

ANKARA (Sputnik) — Russia's Consulate General in Antalya is verifying reports of Turkish media about a bus accident with Russian tourists, who may have been injured, Consul General Oleg Rogoza told Sputnik.

"We are verifying this information and clarifying the details of this incident," Rogoza said.

All the tourists, injured in a minibus accident in Turkey's Antalya province on Sunday, have been released from a hospital, and their citizenship is currently being specified, according to Rogoza.

"The Turkish authorities informed us that all those injured in the accident had been released from the hospital. We are still unable to confirm their citizenship, this issue is being verified," Rogoza said.

At Least 20 People Killed in Car Accident With Tourists in South-Western Turkey
Turkish police confirmed to Sputnik on Sunday that three Russian tourists had been injured in a road accident in Antalya province, though, noted that they had not received critical injuries.

"A total of three Russian tourists sustained injuries in the minibus accident, which took place in our district today. There are no victims or critically injured people, and the condition of those injured is not dangerous," a spokesperson for Antalya province traffic police said.

Earlier in the day, Dogan News Agency (DHA) reported that the minibus accident took place at around 3 p.m. local time (12:00 GMT) on the road connecting the cities of Cappadocia and Alanya. According to the media outlet, there were nine Russian nationals in the minibus, including one child.

Three women were injured as a result of the accident and taken to a hospital, according to media reports.