Centuries of Scorn and Loathing: Why Warsaw's Hate for Russia Burns so Intensely 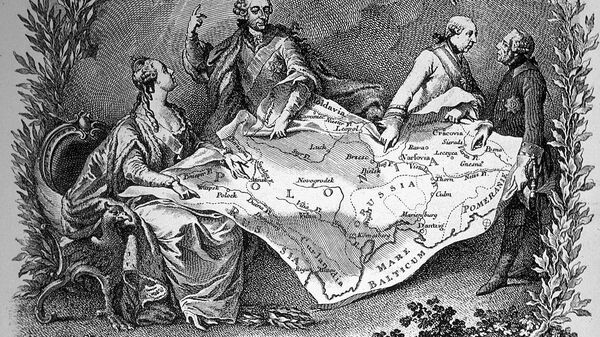 Ilya Tsukanov
All materialsWrite to the author
Independent Russian journalist Svyatoslav Knyazev explores the reasons why Poland remains such a determined and obnoxious opponent to Moscow, even more than a quarter of a century after the collapse of the Soviet empire.

Last week, Warsaw announced plans to create a new defense doctrine singling out Russia as the single greatest threat to Poland, and to build up its military capabilities accordingly. Days earlier, Defense Minister Antoni Macierewicz indicated that the Polish Navy would like to obtain at least four new submarines to 'protect' the Baltic Sea (from Russia, naturally).

Along with these measures, Warsaw has long been an adamant supporter of anti-Russian sanctions, and has embraced the beefing up of NATO's military presence on Russia's borders, including the deployment of alliance troops, equipment and components of the US missile defense shield on Polish territory. In short, the country's leaders seem to have it in for Moscow.

What are the reasons behind this animosity? In a recent article devoted to the subject, Svyatoslav Knyazev, a Russian journalist, political analyst and popular historian, explained that traditionally, Poland's historical hostility toward Russia has been seen to be motivated by three major historical events.

Poland Adopts Anti-Russian Defense Doctrine to 'Get More Aid' From Washington
These are the Soviet Union's incorporation of eastern Poland into the Ukrainian and Belarusian republics in 1939, Moscow's push to establish the Polish People's Republic after World War II, and Poland's absorption into the Russian Empire, in 1773, 1793, 1795, and finally, in 1815.

Leaving aside the first two factors, Knyazev suggested that the last is worth considering more closely.

"To begin with, a bit of background: It should be noted that Ancient Rus's relations with Poland have never been trouble-free. As far back as the 10th century, when the ancient Russians chose spiritual commonality with Byzantium and political independence, the Poles elected in favor of subordination to the papal throne. From that time on, in spite of the ties of blood, culturally and politically, the two Slavic peoples found themselves on opposite sides of the barricades, and the Poles took an active role in the implementation of the European concept of the Drang nach Osten, or the so-called 'drive toward the East'.

Poland twice committed large-scale acts of aggression against Kievan Rus, under the pretext of participation in sectarian feuds, and in 1018, having taken Kiev, even attempted to completely subjugate Russia before being driven off. Beginning in the 14th century, Poland, together with Lithuania, actively grabbed up territories of southwestern Rus which had belonged to the Rurik dynasty. As a result of this creeping expansion, by the 16th century, most of the territory of contemporary Belarus and Ukraine, as well as part of the western regions of modern-day western Russia, ended up as part of the Polish-Lithuanian Empire. In the occupied lands, the Poles established a regime resembling 20th century apartheid, only much more rigid. The Orthodox East Slavic population in these territories was almost completely disenfranchised. 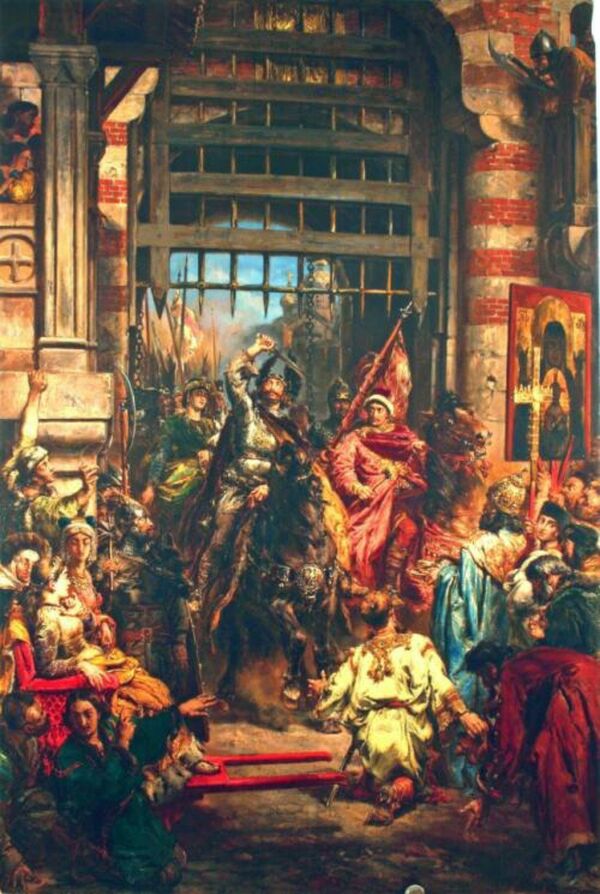 Boleslaw the Brave (left) with Szczerbiec (sword) and Swiatopelk (right) at the Golden Gate in Kiev. On the left, Przedsława Włodzimierzówna. Painting considered lost during WWII until revealed in 2004
© Photo : public domain

In 1610, the Poles reached the peak of their power – their troops having taken Moscow. A year later, they would perpetrate a terrible massacre in the Russian capital, resulting in the deaths of about 7,000 Muscovites. However, in 1612, a people's militia led by Kuzma Minin and Dmitri Pozharsky would liberate the capital, after which fortune would turn its back on the Poles for 300 years. In the 17th century, following the uprising of Bogdan Khmelnytsky and the Russian-Polish War [of 1654-1667], Moscow regained the left bank of the Dnieper and Kiev." 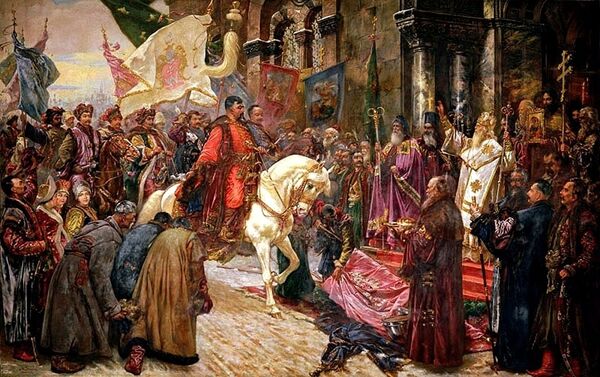 For over a century afterward, Knyazev wrote, Moscow, and then St. Petersburg, when the capital was moved, "behaved in a very restrained manner," and even "artificially propped up the integrity of the Polish-Lithuanian state, providing all possible assistance of its authorities." 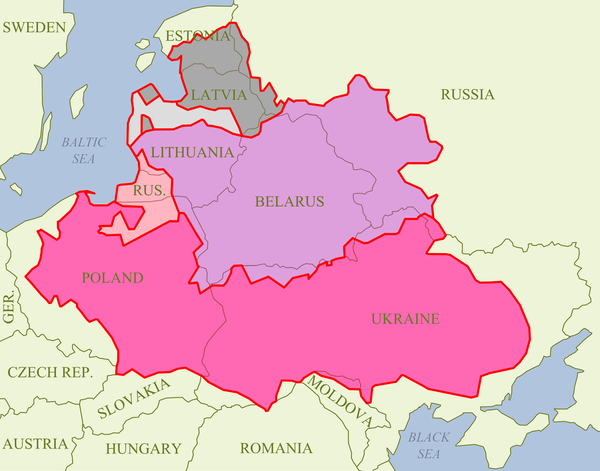 "Only when Prussia declared its territorial claims against Rzeczpospolita in 1772, Russia, with the formal consent of the Polish Sejm, annexed part of the territory of Rus in the area of Vitebsk and Polotsk. In 1791-1792, when radical forces that were firmly opposed to Orthodox and Lutheran believers raised their head in Poland, Russia responded by sending troops to Warsaw.

In 1793, the so-called 'second partition of Poland' took place, which resulted in part of Belarus and the right bank of the Dnepr being returned to Russia. The Poles were unhappy with the loss of the lands, which they saw as their colonies. In 1794, they staged an uprising led by Tadeusz Kosciuszko, destroying the Russian garrison in Warsaw and moving east, to the territory of modern-day Belarus. However, they would be crushed by troops commanded by Alexander Suvorov. After that, Warsaw's magistrate handed Suvorov the key to the city, and the Russian commander released thousands of former militia and declared an amnesty. As a result of the uprising, Russia took for itself the remains of the Polish lands in the east – western Belarus and Volyn."

Beginning in the late 18th century, Polish nationalists would find an active ally in France's Napoleon Bonaparte, who established a Polish state in the form of the Duchy of Warsaw in 1807. In 1813, Russian troops occupied the territory, and during the Congress of Vienna, it was agreed to transfer most of the territory to Russian control. 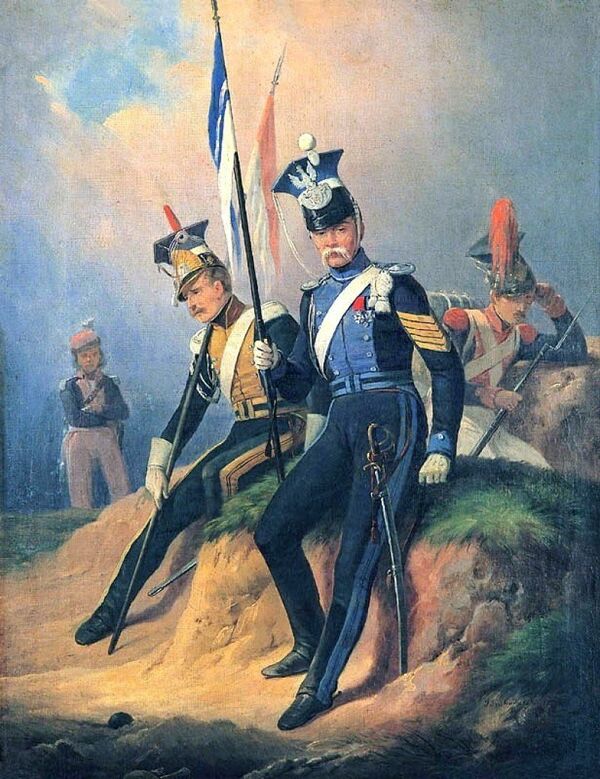 Polish uhlans from the Army of the Duchy of Warsaw 1807–1815 January Suchodolski painting
© Photo : public domain

According to Knyazev, what came after was much more complicated than Russia simply absorbing Poland. Just over 202 years ago, "on May 3, 1815, the Kingdom of Poland was formed…Poland became a state which was formally separate from Russia, but with Tsar Alexander I as its head. The formula 'two countries –one empire' was formed.  The liberal tsar gave his new Polish subjects many rights and freedoms which were seen in few other places in the world at the time."

The Poles received their own constitution, their own government (the State Council), a parliament (the Sejm), an army, an independent monetary system and passports. The laws of the Kingdom of Poland guaranteed freedom for the Catholic faith, use of the Polish language, and the opportunity to participate in elections. In Russian-Polish relations, for the sake of Warsaw's convenience, French, not Russian, was the lingua franca. It would also eventually be stipulated that the positions of governance in the Kingdom of Poland would be occupied by ethnic Poles. An exception could be made only for representatives of the Imperial family (in 1826, for example, Konstantin Pavlovich, Alexander's brother, who married a Polish woman, would become governor of Poland).

On Alexander I's order, cities that had been destroyed by the war would be rebuilt, industries would be created, swamps drained, and roads built. The Bank of Poland and the University of Warsaw were founded."

"However, the freedoms granted by Alexander I had the opposite effect to that which was expected," Knyazev wrote. "Representatives of the Polish gentry took these concessions as weakness, and between 1830-1831 began an uprising aimed at removing the Russian tsar from the [Polish] throne, seizing Ukrainian, Belarusian and Lithuanian territories, and restoring Poland within the borders of the Polish-Lithuanian Commonwealth of old. The rebels assembled a large army of over 80,000 troops, and arrested (and killed) the representatives of the local administration and their families. However, between May and September 1831, Russian troops inflicted several major defeats on the insurgents…and by the autumn, the rebellion was suppressed." 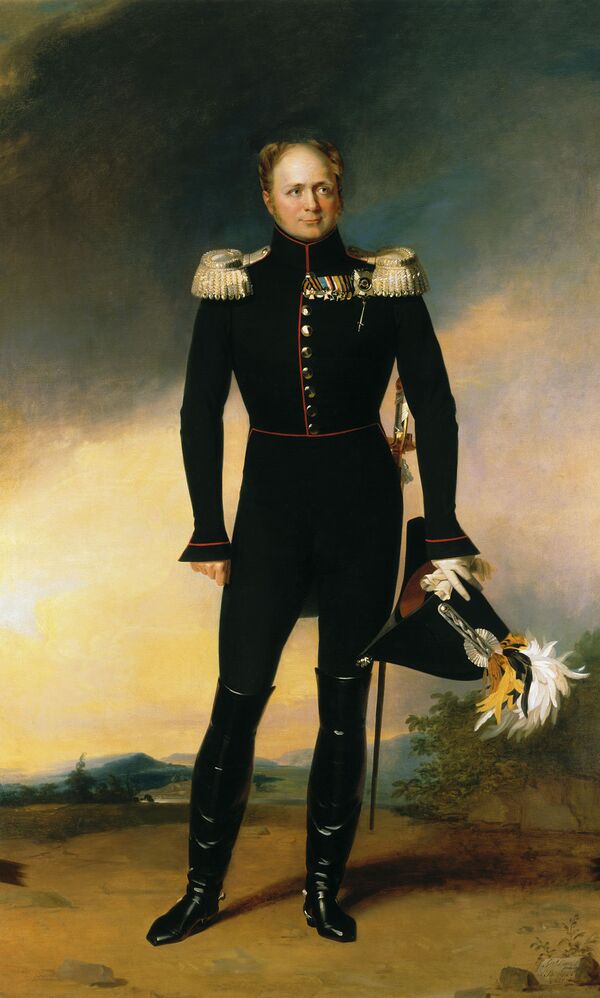 As a result of the insurgency, Tsar Nicholas I liquidated the Sejm and the Polish State Council, introduced a system of provincial control, and closed the University of Warsaw. Under Nicholas I, Russian, along with French, began to be used in official records. The metric system was replaced by the Russian imperial system of measurement, and the ruble replaced the Polish zloty. Full legislative power was passed to the tsar. 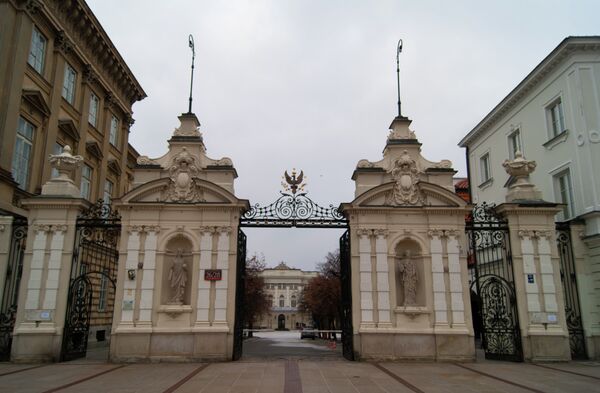 However, Poland's economic development gained momentum under Nicholas I. The Emperor abolished the customs border between Poland and Russia…[and] local entrepreneurs received endless opportunities," thanks in part to the region's industrialization in the decades beforehand.

"He radically expanded the Kingdom's autonomy, restored the State Council, established local self-government, and founded a number of Polish institutions of higher education. In 1861, in Poland, as in Russia, serfdom was abolished, and Polish peasants, unlike their Russian counterparts, found themselves well-endowed with land, at the state's expense.

Again, as per tradition, Poland's elites took the liberal reforms for weakness. In 1863, a new mass insurrection began." This time, however, "the Polish peasants, in the wake of having gained personal freedoms and land, did not support the rebellion by the gentry. As a result, the rebels initiated a bloody terror against the peasants, who in places even began to fight their former masters on the side of the Russian army. In 1864 the uprising was suppressed."

Of the estimated 77,000 rebels, 128 were executed, 800 were sent to Siberia, and 12,500 to other remote areas of the Russian Empire; the rest were released. After the rebellion, freedom of assembly was restricted, and the use of Polish in public places was faced with a fine. In addition, the Polish Latin alphabet was banned. "After the passions surrounding he rebellion subsided, Russian leaders gradually expanded the rights of Poles right up to the Revolutions of 1917," Knyazev wrote.

Ultimately, the journalist emphasized that "on the whole, the preferences given to Poland by the Russian tsars gave astonishing results. If in 1818, the population of the Kingdom of Poland was only 2.6 million, by 1900 it reached 10 million! In the early 20th century, taxation in Poland was approximately 20% lower than it was in Russia. For each ruble of taxes paid, Poland received 1.14 rubles of state subsidies (in European Russia, these subsidies were two times smaller). Spending on education in the Kingdom was 5-6 times higher than in central Russia. If the average literacy rate across the Russian Empire was only 19%, in Poland it reached 35%. Although Poland constituted 8% of the population, about 25% of the Empire's industrial output was produced there."

Knyazev stressed that "thanks to decades of Russian investment, Poland, in the 20th century, was able to take its place as a fairly successful independent state."