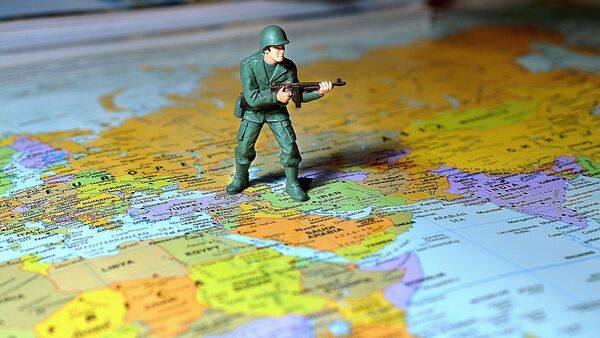 Commenting on President Trump’s recent Middle East tour, Lebanese deputy and member of the country's Loyalty to the Resistance Bloc Walid Sakriya told Sputnik Arabic that the US is redrawing the Middle East and the region is in its final days as it is being currently shown on modern maps.

US Plan for the Middle East is to 'Change Borders of Two Dozen States'
The Middle East voyage of Donald Trump and his meetings with the leaders of Arabic and Islamic countries were aimed at redeploying forces in the region, Walid Sakriya told Sputnik.

Syria, he suggested, should soon become the US' ally, which will break off Damascus' ties with its current allies. The US' new strategy should push Russia out of the Middle East, the Lebanese deputy explained.

"In the 1930s, US President Roosevelt (1933-1945) had made an agreement with the first monarch and founder of Saudi Arabia, Abdulaziz Al Saud, to grant the country the protection and support of the US in exchange for the Saudi oil," he told Sputnik.

With the new threats the monarchy is currently facing, he said, the time has come to renew its political strategy, which is being resulted in the setup of a new regional organization, the so-called "Arabic NATO". The kingdom, in its turn, is increasing its investments into the US economy.

New Sheriff in Town: How Russia Has Yet Again Outpaced US in Middle East
"The Saudis regard Israel, Iran and its allies, as Hezbollah and Syria, its main threats. US President Trump has also labelled Iran an enemy because Iran is an enemy of Israel. Hence we think that the situation in the Middle East is going to change. First, there will be a conspiracy against Syria, then full change of power in the country and its further turning into an ally of the US," he told Sputnik.

Then, he further suggested, Russia and other countries which are against the US' policies in the region will be squeezed out of the Middle East.

The deputy explained that the plan also suggests the breakup of Syria in order to ensure maximum security of Israel from Iran and Iraq.